The school holidays and a road trip planned for me and the kids.

A plan to visit the Brecon Beacons, an area we’ve never visited before.

The scenery much less dramatic than North Wales, but it’s easy to fall for its gentle rolling landscape and green charm.

A whistle-stop tour for us though, so we try to cram as much as we can into our two-day trip. Luckily a stress free journey gives us a few spare hours to play with, and with a whole new playground to explore I figure a good way to find somewhere interesting to visit will be to check for some local caches.

Hidden way back in 2001 it’s a great vintage cache for my stats. Then I realise it’s hidden on the top of Blorenge, which seals the deal.

I mean who wouldn’t want to head to the top of a hill which proves there is a word that rhymes with orange after all?

It doesn’t take us long to summit.

Mostly because we drove nearly all the way to the top. 😉

Still, it’s completely necessary to celebrate any summit and I think we did this one justice… 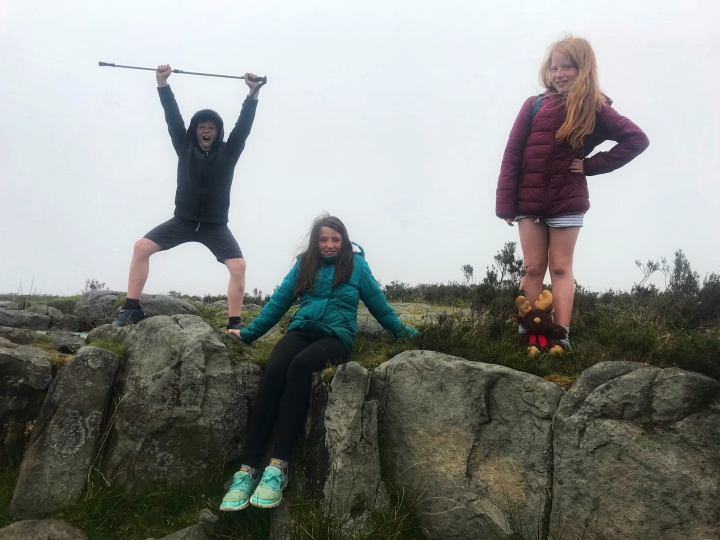 However this doesn’t stop some guy having a go at me because my kids are all wearing trainers.

I point out my car in the near distance, whilst thanking him for his concern. My eyes rolling so much I’m actually concerned they might pop out of my head and roll down the hillside. 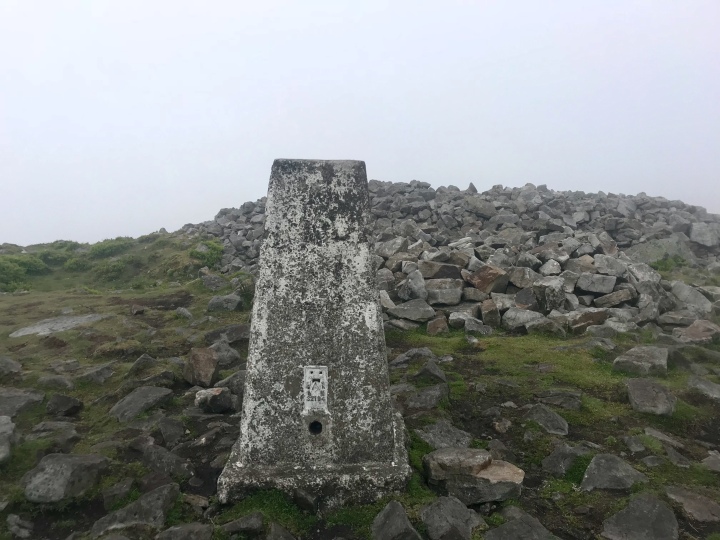 At the risk of further wrath from well-intentioned strangers we boldly venture another 200m.

On top on of a hill I drove up, without the entire stock of Mountain warehouse in my backpack.

Just as well he then can’t see us scrambling all over a rocky outcrop looking for the cache.

I scan the terrain and predict that we aren’t going to find the cache.

The potential hiding places are plentiful and many experienced cachers have reported spending long periods of time searching for the cache. I’m just not that patient.

We then even manage the flat, clearly defined path back to the car, without even having to call out mountain rescue.

The next day, we have big plans.

The mountain forecast however is set to disrupt things. Predicting storms in the afternoon. Admittedly only a small chance of lightning, but even a small chance with three kids trusting me to keep them safe is too much. Drat.

I reassess my plan and as we’re all up early (The joys of kids in a hotel room. 😴) I decide we’ll go with an early start and bag Pen Y Fan, and Corn Du whilst the forecast looks promising, if a little misty.

By 8am we’re setting off from the car park at Storey Arms – sadly not the pub which it sounds like it should be.

Apparently one of the children, if he could choose for anything to not exist right now, it would be this mountain.

It’s just too bad I forgot to pack any sympathy today.

I did however pack plenty of snacks so my default response of the day becomes ‘Have a wine gum buddy.’

If only Mr Blorenge could see us today. Suited, booted and so well kitted out we look like a walking TV advert for a wholesome, active family lifestyle. Just as long as you turn the volume right down… 😉

The kids are struggling more than usual today.  Thanks to a combination of having to carry their own kit and a broken nights sleep.

It’s a long trudge of an ascent with plenty of stops to catch breath, eat snacks, tie shoes 4000 times, and stage a sit-down protest or two.

Steadily though we make our way up and are eventually in thick cloud cover. The path begins to level out a little and it’s time for our brief diversion to Corn Du.

The cloud thick, visibility is poor, I quickly confirm with a check of my map and we follow our required fork in the path.

Then a voice booms through the cloud, Nope, not a divine intervention just another ‘helpful’ walker who shouts quite bluntly; ‘You’re going the wrong way!’

Given I’m 100% confident I’m not, my less than gracious response of ‘No I’m bloody not!’ is clearly neither big, nor clever.

Anyway, we continue on our correct path, a brief scramble to the summit of Corn Du – not at all scary in the cloud, when you have more children than hands. 🙈

But somehow despite being with a lone female, my children make it, alive, to their first summit of the day. Who’d have thunk it. 🙄

Admittedly it is a little anticlimatic. 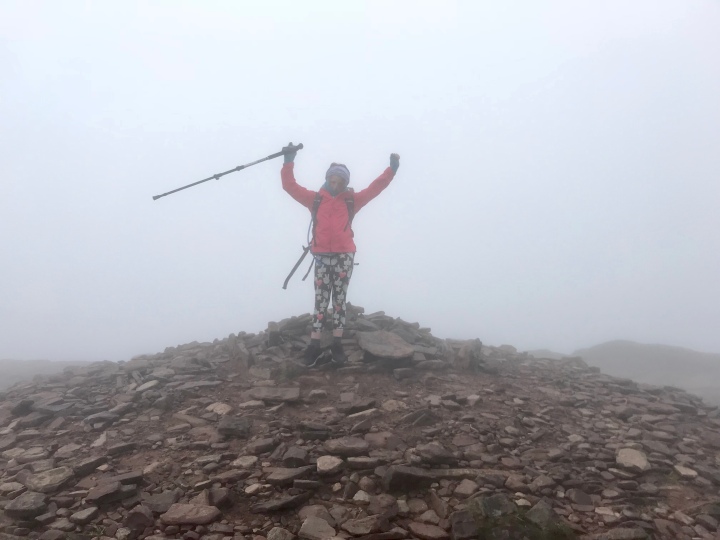 By now the cloud is so thick I can’t see the path which leads directly to the summit of Pen Y Fan.

As I’m with the kids I decide it’s safer to backtrack the short section to the main path.

A short final push and we summit Pen Y Fan.

The kids clearly struggling to contain their excitement. Don’t those grimaces just say it all…

Back down in time for lunch and typically for the sun to come out. 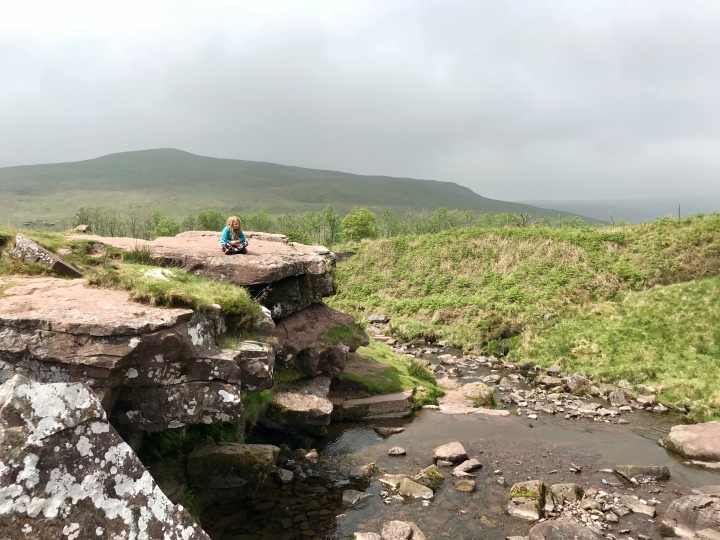 We now have a free afternoon so I ask the kids what they’d like to do.

Apparently McDonald’s, followed by heading back to the hotel to chill out.

Crappy chicken nuggets I can cope with, wasting time in a hotel room though – absolutely not.

After we refuel we head to Ystradfellte, waterfall central.

There’s an EarthCache I want to complete.

Yep. That’s right. I’m actually choosing to do an earth cache without someone pointing a gun at my head.

An EarthCache provides an earth science lesson through a visit to a unique geological feature.

I’m interested in the features and the geology but the nature of claiming the find is just a little too rigid for someone with a slightly rebellious, free-spirited nature.

This one however, looked to be pretty spectacular.

Not the usual lump of layered rock to examine, consider and estimate 😴 (Ok, actually, technically it is.) but in the form of a rather special waterfall.

The River Hepste plunges over a band of resistant gritstone to form Sgwd yr Eira (translated from Welsh as ‘fall of snow’). This band of gritstone, (See. I can do geology!) means the waterfall protrudes leaving a footpath behind the impressive curtain of water.

Walking behind a waterfall it has to be said is a pretty amazing experience, certainly worth doing your geology homework for, purely so you can leave a geocaching favourite point.

It is however a long but pleasant walk, especially for little legs that have already summited a mountain that day.

Apparently though walking behind a waterfall is cool enough even to make you forget you hate your mum for making you walk so far.

10 thoughts on “A trip to the Brecon Beacons”