Striding Edge is a renowned ridge and arguably the finest way to summit Helvellyn.

Crags and scree fall away from either side of the arête, with plenty of exposure a breathtaking and quite dramatic scene. A grade 1 scramble that’s relatively easy as long as you have a head for heights, and can be made easier by following alternative paths below the main ridge – but where’s the fun in that?

It’s a route that has been on my to-do list for a long time and of course has a place in my 40 Things list.

Not really a walk I fancied doing alone and lacking a friend who shared my enthusiasm, I once again turned to the murky world of Facebook groups. Something I’ve done a few times before with generally positive results, and have mostly managed to avoid all of the psychopaths.

The plan was to assemble in the Glenridding car park. As someone who always runs early this meant a lot of awkward car park loitering, hoping to spot the right group or at least choose those that look the least murdery.

However the correct people were found, yet my relief was to be short lived. Somebody shuffles up to me and discreetly tells me that as a woman on my own, I should be made aware that some people use these events as an opportunity to hookup.

I’m pretty sure I’ve signed up for scrambling, not swinging. 🤷🏻‍♀️

I work on the assumption they’re taking the piss, but luckily with it being a large group it’s easy enough to avoid anyone with even a whiff of desperation.

The route from Glenridding is the longer walking option but with plenty of outstanding views to keep you going.

A humid and overcast day – not my optimal walking conditions. I do find the heat draining, especially when you consider the raging altitude sickness I’m suffering from having left the fens and being above sea level. 😉

It’s nothing however a Snickers bar can’t solve, with a brief stop at Red Tarn to refuel before we push up to the ridge itself.

With it being my first ridge I’ve been slightly apprehensive, especially given how frequently I fall over but I was pleasantly surprised at how wide the ridge actually is.

The sides certainly steep and with plenty of exposure, you definitely want to watch what your feet are doing. However it is exciting rather than scary.

With little in the way of technical challenge, I only had one ‘Oh crap. Where do I put my feet?’ moment. In my defence this was on the most challenging section of the route, descending The Chimney, and descent has never been my forte. But hey, I’m not still cragfast so I clearly figured it out. It’s a good idea to have someone spotting at this location though.

The bigger challenge for me though is that the coupling has begun. A pair having just met and the Oxytocin is flowing.

I’m right behind them and as we stop on the ridge for what must be the 4000th selfie my patience is wearing a little thin, or maybe I’m just jealous. 😉 It’s a relief however to finally bypass them.

With the chimney completed there’s just one final ascent, a short but fun scramble over the rock face before your summit is in the bag.

Once on the summit, you are rewarded with some spectacular views and a great opportunity to take in the route you’ve just taken up. 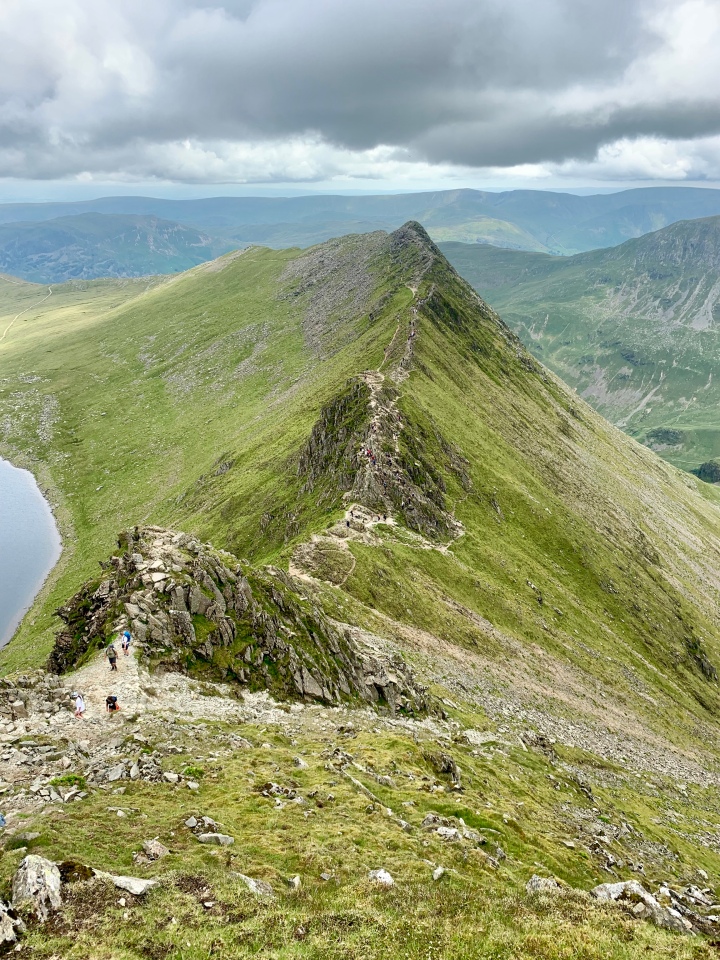 I also took the opportunity to check out the local geocaching opportunities, with one on the summit and some others nearby I decide to go rogue.

I bid farewell to the group, repeatedly reassuring them that I am perfectly competent of looking after myself in the mountains, honest. I then skulk off in geek mode.

Some stealth necessary to grab the summit cache, but I’m ace at that too. 😉

There’s a couple of options to get back down but if you’ve tackled Striding Edge the obvious choice is to descend Swirral Edge. The easier of the two edges, it’s short and straightforward but with its jumbled boulders and the added exposure of descent, care still needs to be taken. Especially if you’re on your own, and clumsy. 😁 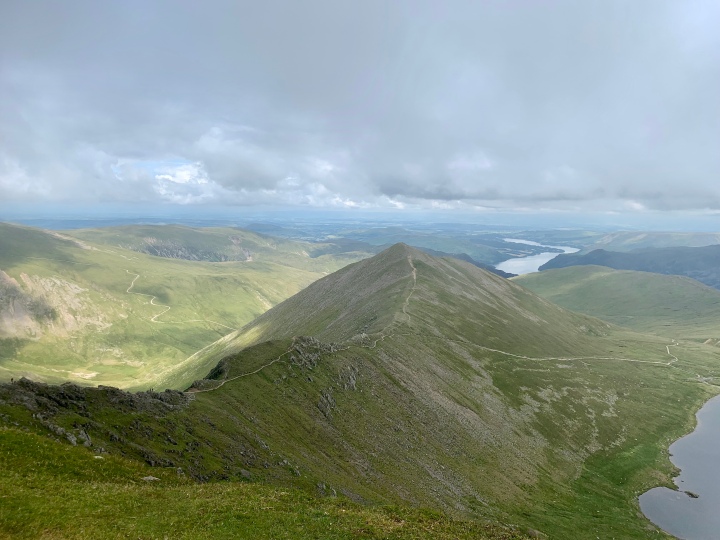 You’re soon however back at Red Tarn. Another cache to find in an isolated spot as the crowds head back down towards Glenridding.

I’m in no hurry to get back though, the joys of solo travel. It turns out to be the perfect spot to stop and contemplate life, the universe and everything more importantly what to have for dinner.

The sun now out and the sudden realisation that my sun cream is in the car ensures a speedy walk back. The satisfaction of ticking off one of my 40 things, as well as having an exciting day out in the mountains. If you have a head for heights I’d certainly recommend you give it a go.