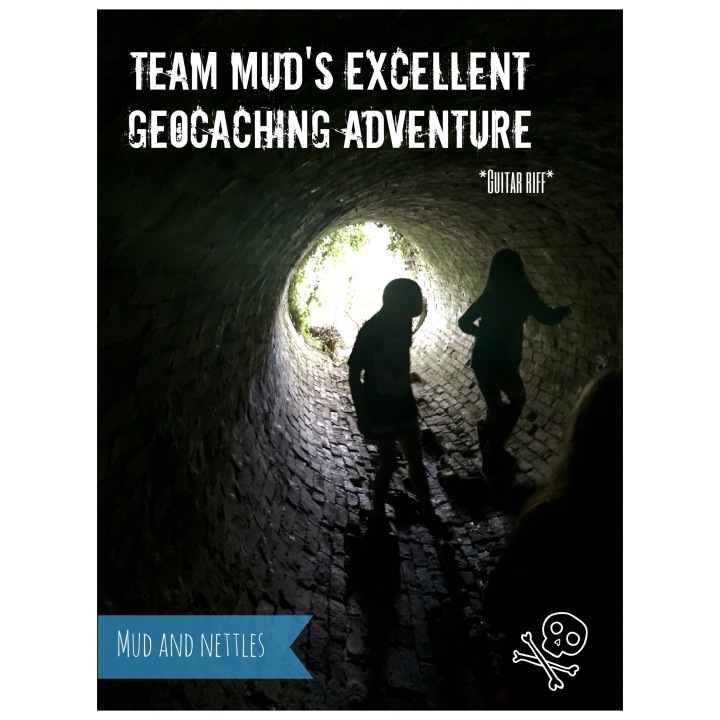 Things have been a bit quiet on the caching front recently. Some pretty uninspiring caching on holiday; Oxford – I’m looking at you and a minor slump set in.

Finally giving myself a kick up the rear end it was time for action. Oh yes, time to get serious and search for some super caches.

Don’t get me wrong, my local area is full of lovely places and some fab cache setters but we kind of fall a bit short at adventurous locations. Miles and miles of fen and farmland leaves us lacking in hills and caves – or maybe they are there and I just can’t find them. 😉

Anyway a trawl through caches of the neighbouring regions threw up some interesting looking caches.

A cluster of adventure promising caches with varying terrain and difficulty ratings all by the same cache owner. Noztradamus&JackNano – I salute you! 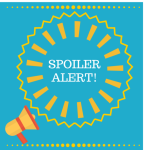 We started the day with the cache I was most keen to find, after my urbex fun at Bomber Command I was keen to get myself down a bunker for some more exploring.

Arriving at Nano’s Secret Nuclear Bunker it quickly became  clear this was a great bunker to explore, suitably hidden away meant it was in pretty good shape, with only an atmospheric level of grime and the unmistakable whiff of a slightly damp geocache. Perfect. 😉

Being a kind and selfless soul, I volunteered Mr muddy to head down first and ensure there were no nasty surprises within.

With the coast clear, the kids were surprisingly keen to head down. Nice job team. 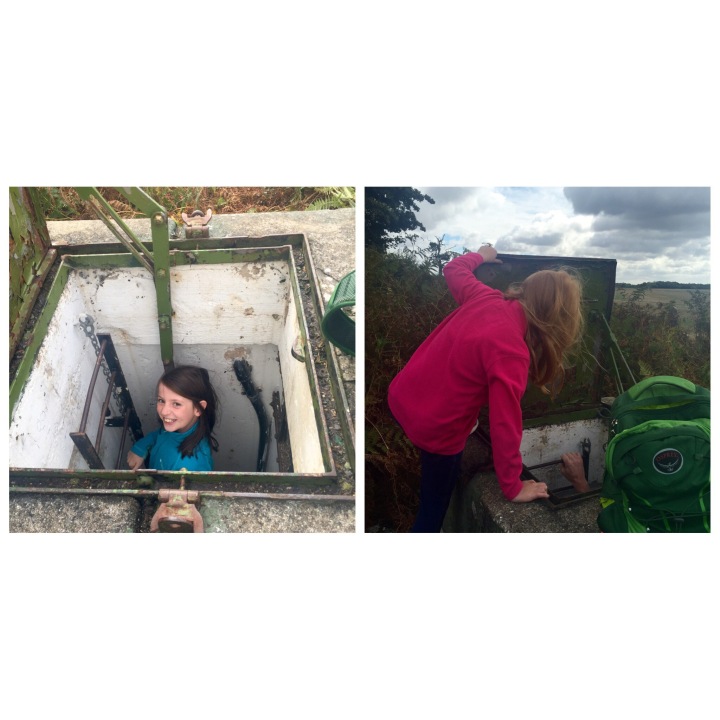 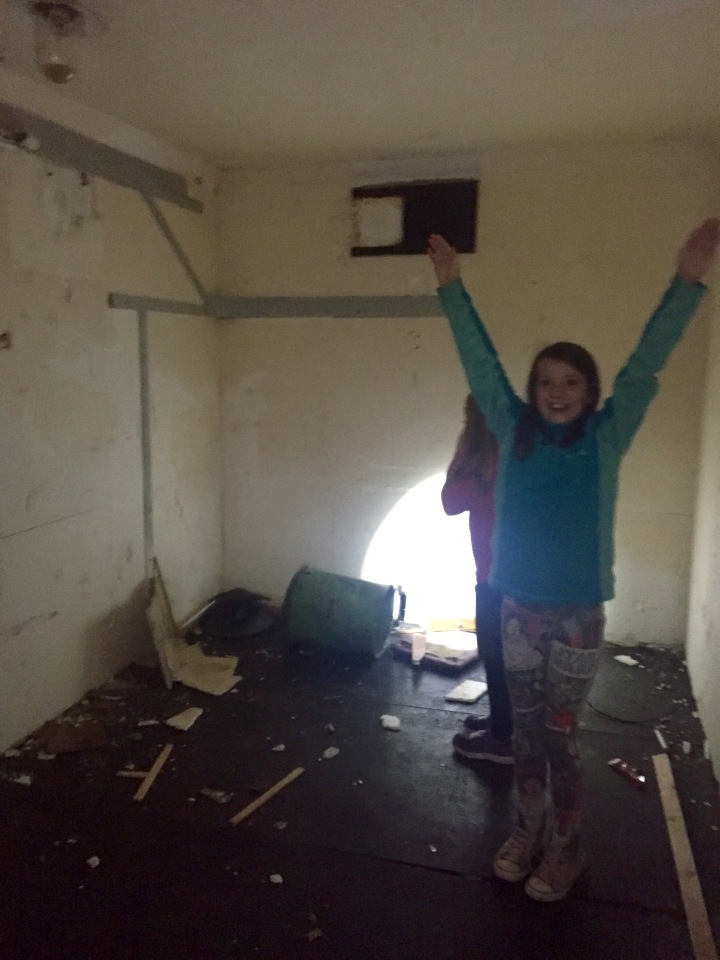 Some of the code numbers needed to access the cache were blatantly obvious, and with two numbers under our belt we had the cache itself tracked down. No sign however (for us) of the elusive final number, but with one of the children nominated as chief code breaker we were soon in the cache.

A great cache. A worty favourite point awarded, and a threatened divorce on the way out as my hilarious husband proceeded to lock me in underground.

We were then off to the rather appropriately named Are you afraid of the dark?

But I still really do want to go exploring in a very long underground tunnel.

Booted up and as usual with enough torches for everyone but me. *Sigh*

[Rubbish photo warning, old phone was on its last legs at the time.]

This adventure was nearly a non starter, arriving at the designated coordinates to an ordinary suburban area we paced the raod back and forth, struggling to find anything remotely tunnel like untill finally we spotted a gap in the hedge. a-ha!

A slope leading down to a murky looking swamp. How wonderful. (Apply sarcasm)

More promising though was the gaping tunnel leading to said swamp. Ooh! 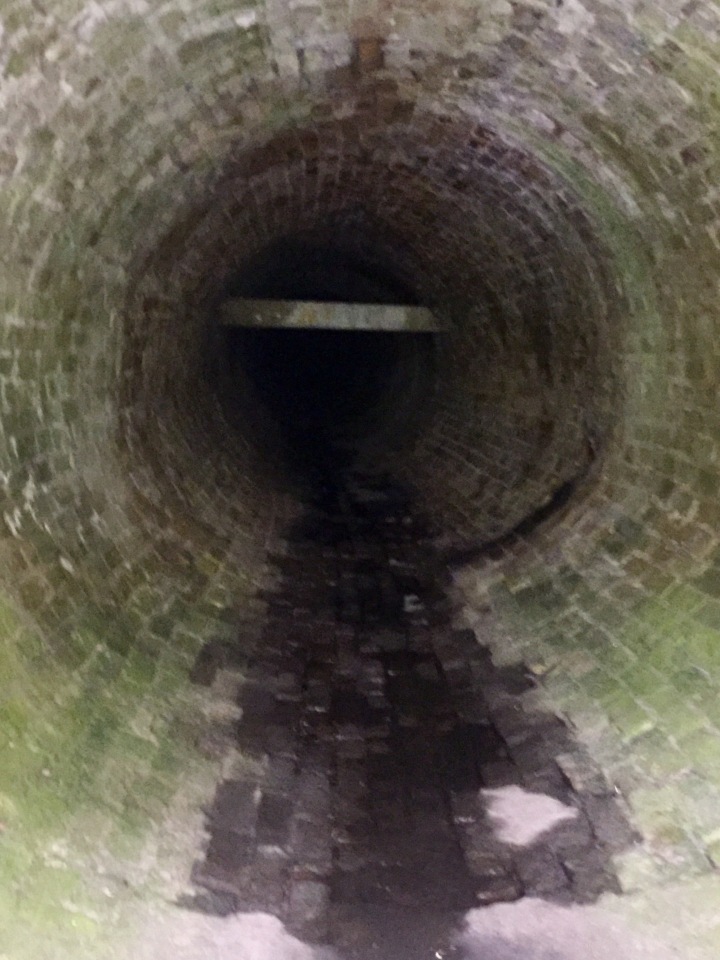 Taking the rear, and therefore at most risk of being grabbed by the underground monster – we’ve all seen Scooby Doo right?… 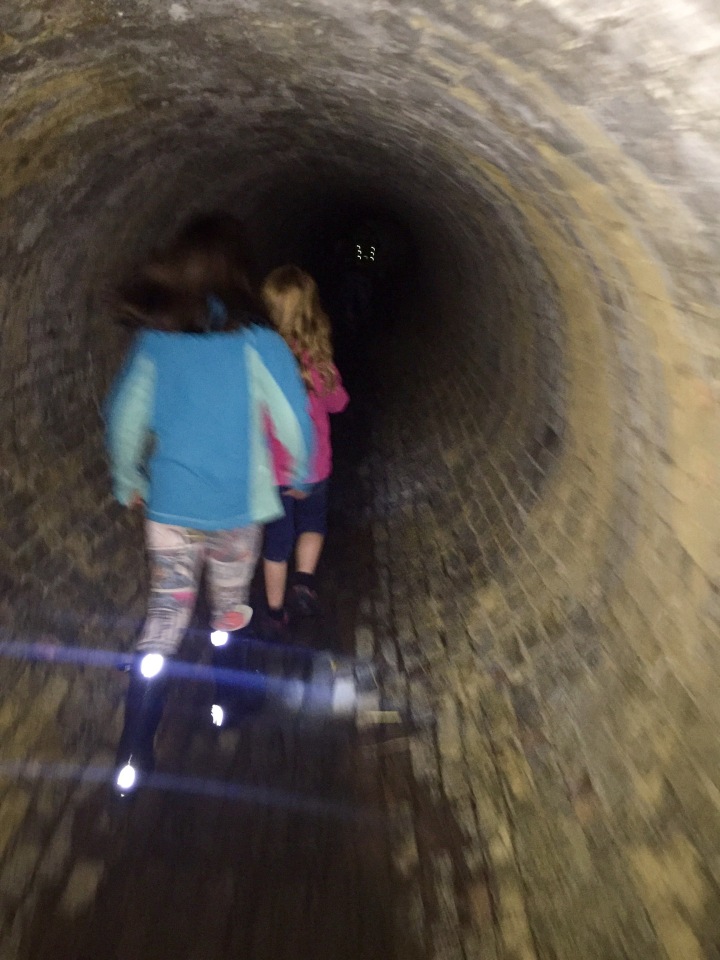 The kids embracing their inner intrepid explorer are giddy with delight at the darkness, slippery slopes, dubious puddles (Best not to think about it.) and torches. The small person in front of me getting a little too courageous and switching his torch to the frankly useless, red light function.

The tunnel winding ever further and darker I constantly  advised him to switch to a brighter light source.

They of course know best, until the inevitable yelp and squelch as the little cherub goes A over T into a spectacularly muddy puddle.

‘IT’S THE TORCHES FAULT!’ – the outraged cry in the dark.

Luckily it’s too dark for anybody to see me shaking my head in disbelief. 😉

Finally we spot daylight, having reached the far end of the tunnel as instructed. I’ve no idea how long the tunnel is but we seem to have emerged in a distant land.

We are now required to back track to seek out the cache, the muddy bottomed boy quickly spots something out of place. I wont spoil it, but it’s a cracking hide.

I make a half hearted attempt to retrieve the container but end up pretending I can’t reach it, beacuse, you know, spiders. 😬

Another favourite point awarded, it’s a good job I’m usually so stingy with them. :p

Then It’s onto our final cache of the day.

One I was quite dubious of, Nano’s Bridge of Terror.

This cache far exceeded my expectations. Added to the list as an aferthought I was expecting a shimmy over a sewer pipe above a river. Mr Muddy was keen though so it made the grade. I couldnt have got it more wrong. (Not that I’m ever usually wrong of course 😉 )

Another false start as we find ourselves on the wrong side of a water course, ignoring footpath signs we were soon better positioned and overlooking a rather feisty weir, an old, rotten wooden *ahem* bridge and an old battered sluice gate, all however in a pretty neat spot.

Mr Muddy charging ahead, leaving me and the kids on the riverbank to watch on with a mix of fear and jealousy. *Pouts*

Luckily for me though, he couldnt find the cache. Having searched the bridge, sluice gate and everything inbetween.

Time to call in the professional. Obviously that’ll be me.

Given I’m terrified of absoloutely everything and I swim like a brick, possibly not the most sensible cache to attempt.

My method of survival was definately not thinking about what I was doing. Ignoring the rotten wooden beams beneath my feet – which even had Mr Muddy calling out for me to please be careful. I certainly couldn’t think about the unrelenting rush of water as it passed by beneath my feet.

Merely  focusing on the challenge ahead.

Then it was the perilous balance across rotten, unstable beams.

A moment of safety and the chance to once again breathe, before navigating the relic that is the sluice gate itself. Oh boy!

Serious heart in mouth stuff but So. Much. Fun.

I gingerly make my way across. Being a pocket sized wuss however works in my favour, rather than attempting to inch round a piece of jutting out engineering I opt for a duck below and cling on for dear life method, and why hello there, come face to face with the cache.

Humble as ever I call out that I’ve found it, sadly the air punch has to wait this time as I’m still clinging on for dear life.

A quick pat of my back pocket soon however wipes the smirk form my face. I’ve left my pen on the river bank. Balls.

With time getting on it was sadly time to call a halt to the adventurous caching.  With plenty of others still to find in the area though I can’t wait to go back and try some more.