Having received a needs maintenance log for my blog from a helpful twitter stalker, it seems I’m overdue in keeping the virtual world updated with my calamitous caching exploits. Not wanting to deprive my adoring fans, all two of you, (Hi mum!) here’s the next instalment of my rather tame birthday bash in the peak district.

Once more the weather was shocking, but it’s winter, in the peak district of course it’s going to be raining. After dragging the kids up Kinder Scout on my birthday, I wanted to squeeze in one more big walk before returning to the flatlands and ideally find a cache that would fill in a gap in my DT grid too.

The worst question you could ever ask me is what I want for dinner. Way too much pressure, I’ll get back to you with a response in about four years…

As such, planning is not so much my strong point and I spend quite a bit of time thinking on the fly whilst mumbling bad words.

In such situations it’s best just to go. To drive and eventually I’ll pick a spot on the map and commit. Maybe. *Hyperventilates*

Mostly it turns out ok, and on this occasion after much umming and ahhing I found a suitable caching candidate and even managed to yell stop in time to pull into a suitable parking spot with only a small cloud of burnt rubber.

Even better, luck was on my side and as I got my bearings realised we’d be heading up to Alport Castles, somewhere I’ve always wanted to visit. Couldn’t have planned it better. 😉

Our itinerary may be haphazard but other planning isn’t, flippant I may be but I’m always suitably kitted out and equipped when heading up into the hills.

Parked, booted and wrapped up – even the dog who now resembles an inside out jaffa cake and looks pretty smug about it too and we’re off.

We’re taking the route from the A57 so our path heads straight into a farm. And just like the walk is done.

Cows navigated, fear palpable, and as I quickly calculate that this route isn’t circular I realise I’m moving to Alport Castles, because sod cows.

With huge relief we reach the other side of the farm and the right side of a fence, our next challenge quickly shows itself. A steep riverbank to descend that’s pure mud. Time to release the mountain goat.

Amazingly though, I remain upright. Go me! Just as well as the River Alport is rushing by, full and fast.

A muddy and windy slog uphill as we start to catch a glimpse of Alport Castles. 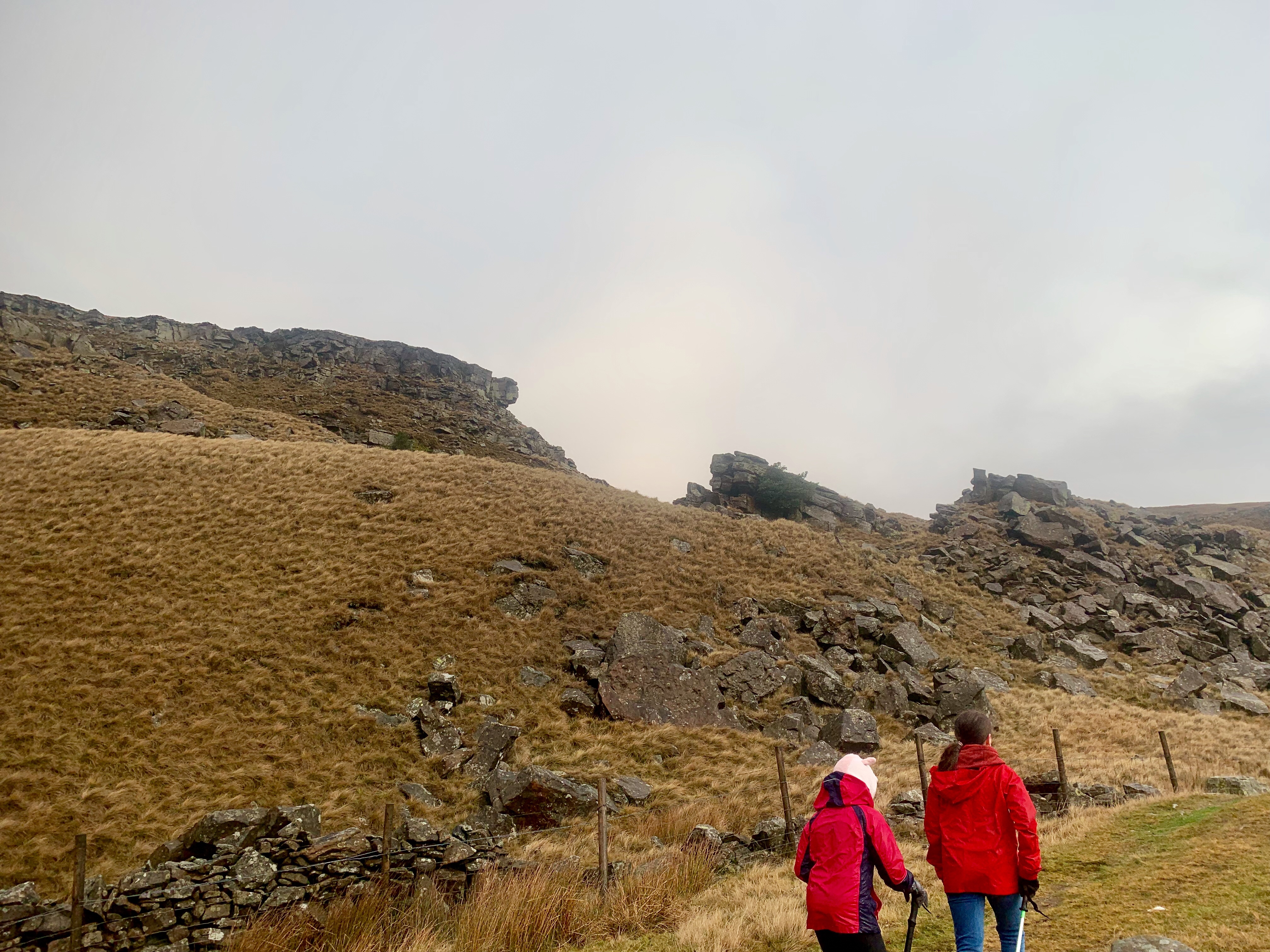 Alport Castles are a landslip feature in the Peak District National Park in Derbyshire. At over half a mile long, it is thought to be the largest landslide in the United Kingdom. The name “castles” comes from the debris from the landslide, which has produced several gritstone mounds that tower over the valley and appear from the distance to look like castles.

Cold, wet and wind battered we reach the top of our ascent and Alport Castles. The cache hint helpfully tells me it’s hidden behind a rock. In an area covered in rocks. The high difficulty rating is certainly well deserved. 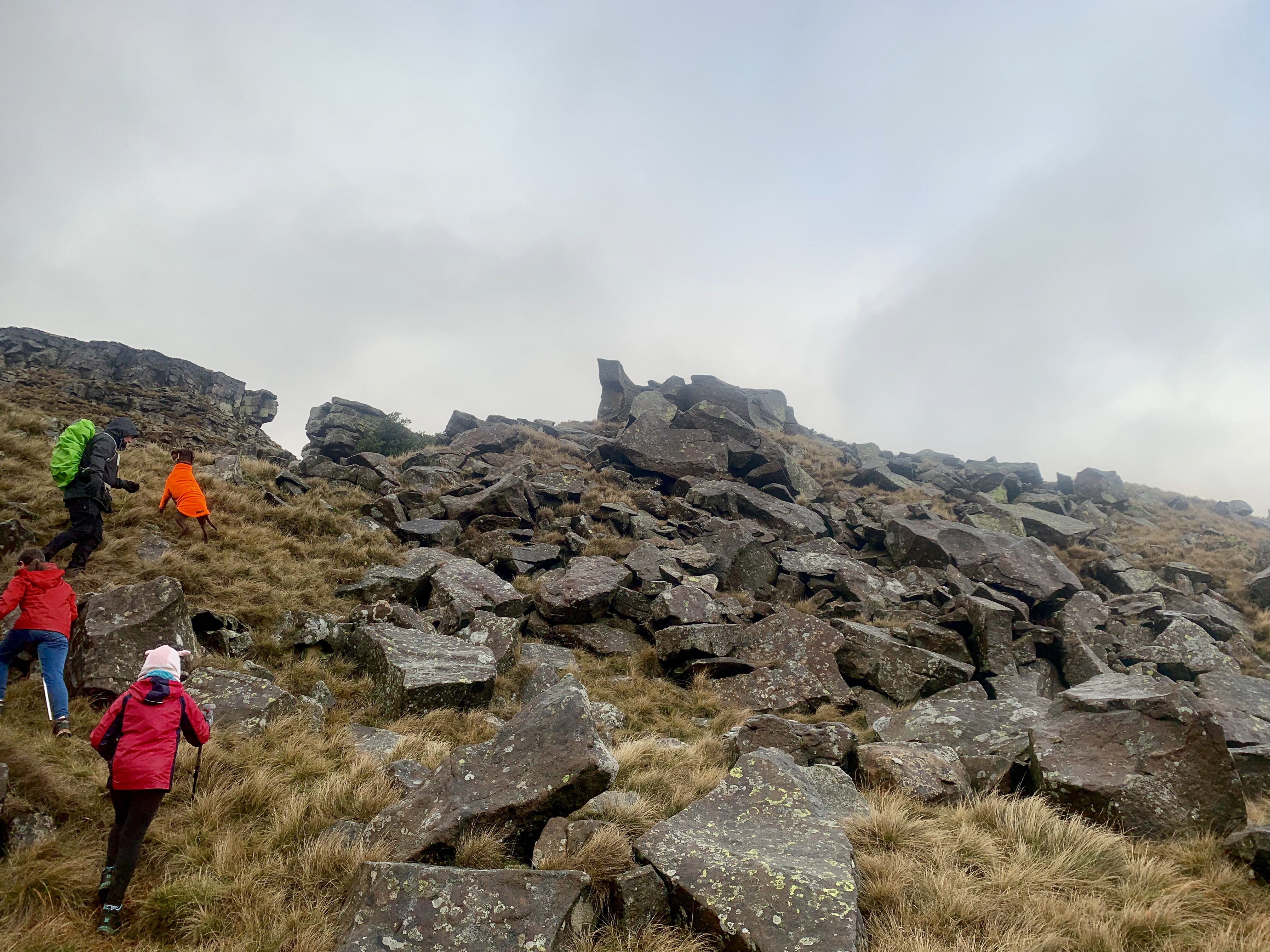 However finally we find it and another gap in my DT grid is filled.

However jubilant I may feel, the kids are struggling. The wind is brutal and despite being well wrapped up now that they have stopped moving they are feeing the chill. Time to break out the emergency shelter and stove to warm them up. With the kids sat in the warm drinking hot chocolate, the adults wait outside in the wind and rain. Note to self:buy another shelter.

A hardy hill walker walks by, the shelter a writhing mass of three siblings sharing a confined space. “Wild camping?” he asks.

In that? With them? Here?

Hell to the no.

Less wild camping, more like wild children, speaking of which it’s time to get the ferals down.

Ideally I’d have loved to have stayed and explored more but hypothermic kids are not on my to-do list. Looks like I’ll just have to go back again. Shame.

The route back down doesn’t take long at all, the combination of gravity and mud a winner for a speedy descent. Once again though I manage to not fall over. Not even once. Am I even still Clare? 🤷🏻‍♀️

Even better, the cows have buggered off too. Hurrah!

And as we head back to the car, cue the sunshine, because sod’s law and why the hell not…*Rolls eyes*

It doesn’t matter though; we’ve had a fabulous adventure, visited an amazing place and feel a great sense of achievement at finding a pretty difficult cache. Even better, I’ve worn the kids and dog out too. 💃🏻

5 thoughts on “Geocaching at Alport Castles”