This week I have a guest post from Mark who blogs over at hillexplorer.com

Over the years I’ve received numerous delightful messages to say that I’ve inspired people to go out and try their very own geocaching adventure. Mark was also curious about my geo-ramblings and so whilst we were undertaking The Yorkshire Three Peaks Challenge a quick diversion was made to show him what it was all about. Oddly enough the experience didn’t scar him for life, in fact he’s gone on to have some fantastic Geocaching adventures of his own.

Here’s his story about a recent trip to the Peak District. I’m all kinds of envious…

Let’s just get this out of the way first. I’ve only just started with the whole geocaching thing, and it’s all thanks to Ms Mud here for introducing me to this frustrating and slightly geeky pastime. I decided that it would integrate nicely with the long walks that I do up in the hills, and the following is my account of the first of those walks. It was in the Peak District or, more specifically, the Dark Peak, and mainly covered the south-west corner of Bleaklow.

From the lay-by at the summit of Snake Pass, I headed along the Pennine Way before turning left onto the Doctor’s Gate footpath. It wasn’t long before I was at the coordinates for the first geocache of the day. The cache was away from the path on the slopes of Urchin Clough. After my disappointment and frustration attempting to find a few local urban caches in spider infested Ivy bushes, I was relieved to find this one to be very easy to find. In fact, it was in the very first place I looked. The view from here is quite spectacular, looking across Crooked Clough to the southern slopes of Bleaklow on the other side. The beauty of the area though was unfortunately spoiled by an old tent that somebody had left here. Inconsiderate bastards. On I went along the Doctor’s Gate path and before I knew it, I was at the next cache of the day. This was a little trickier to find as there were quite a few possible hiding places amongst the rocks on the slopes just under the path. I eventually realised that I was looking in slightly the wrong area, and found the cache quickly after moving a little further along the slope. Still the same stunning views as last time, although now I was a lot closer to Ashton Clough, which would be my ascent route up to Bleaklow. I ascended Ashton Clough, passing various bits of airplane wreckage on the way. From the top, I headed up to the memorial site on James’s Thorn. The third cache of the day wasn’t too far from here, and was fairly easy to find. Once I’d navigated to GZ the hiding place was obvious. The views were fantastic looking out over Yellow Slacks, and also out towards Glossop. Next on the list – an underground cache. Should be interesting!

I headed down the slopes towards Ferny Hole to look for this underground entrance. It wasn’t difficult to find, however didn’t look particularly inviting. Just a damp hole in the ground. I equipped myself with the headtorch and lowered myself into it. The entrance to a cave was down in the hole, and I cautiously entered it. So far, it had been a very hot and sunny day, and so the sudden temperature drop inside the cave was very much appreciated. I shuffled along a few metres, and there, on a shelf to my left, was the cache. 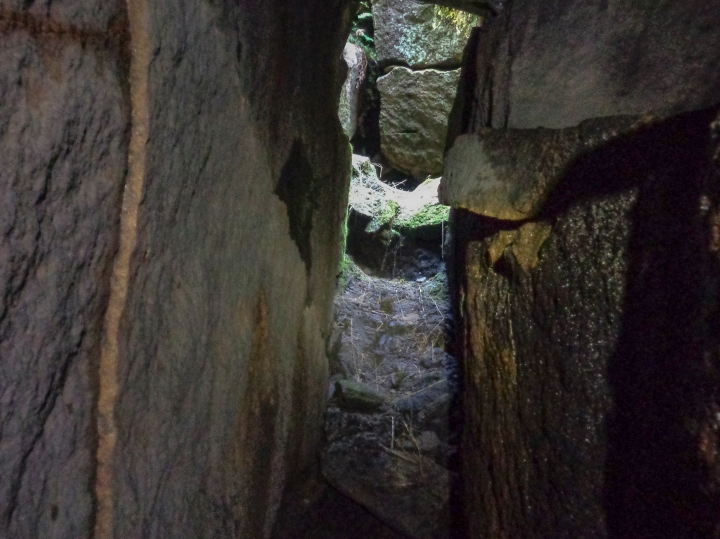 There was a twist to this one as the cache contained an ultraviolet marker pen to use for signing the logbook. An ultra violet torch was also supplied so that you can see your signature once done. After climbing back out of the cave, I headed down Wigan Clough as far as Yellowslacks Brook. My fifth cache of the day was to be found hidden near here – and it didn’t take me long to find it. Yellowslacks is a lovely brook, flanked by steep rocky crags, and leads all the way up to the Bleaklow plateau. And it gets better too the further up you get. The top section involves some easy but enjoyable scrambling up the small waterfalls as the clough starts to get narrower and narrower. Once on top, I backtracked a little to Dog Rock, overlooking Yellowslacks Brook below. With the help of the hint, I found the cache after a couple of minutes looking. It was well maintained and had a few interesting trinkets inside. The views from here overlooking the brook and over towards Bleaklow on the other side are stunning. After taking them in, I turned around and headed back towards Bleaklow. Next stop – Bleaklow Head. The Bleaklow Head cache isn’t actually at Bleaklow Head itself, but rather a hundred yards away hidden away in rocks. With the coordinates, it wasn’t very hard to find – a running theme today.

Bleaklow is as you’d expect. Bleak.

It’s a large windswept landscape, scarred with endless groughs that make route finding difficult, and walking arduous. Still… there is a beauty to be found in all this. Just like a person, it’s the imperfections that make it perfect. Perfection often lacks character, and character is something that Bleaklow has in abundance. This was about as far away from my start point as I was going today, and so it was time to navigate myself back to the start. I headed south towards Hern Stones – which is also the name of the next cache I was due to find. Hern Stones is just another bunch of weathered gritstone that has been given a name. You could easily spend a whole weekend up here investigating the different formations scattered about the plateau. The cache was not at the stones themself, but a little further south. It hadn’t been hidden very well as I could see it well before I actually got to it. I put my name in the log and attempted to hide it a little better. Ideally I needed a rock to place in front of it but couldn’t find one in the immediate vicinity.

Further south, I arrived at the last cache of my journey at Higher Shelf Stones. The area is littered with old graffitied gritstone, with dates ranging from the more recent, to a few decades before I was even born. It’s the older graffiti that interests.

Nearby are the remains of a plane wreckage – one that I knew about but temporarily forgot about on the day, meaning that I didn’t visit it. It’s a good excuse to come back. The cache was relatively easy to find a little lower down the slope although it’s contents were rather dubious – a soggy fag, an empty sweet wrapper, an empty can of coke, and I think there may even have been a condom in there (in it’s packet!). I wrote my name in the log book, took in the amazing views looking out over doctor’s gate and snake pass, and towards kinder, and then made my way back to the car via Crooked Clough. 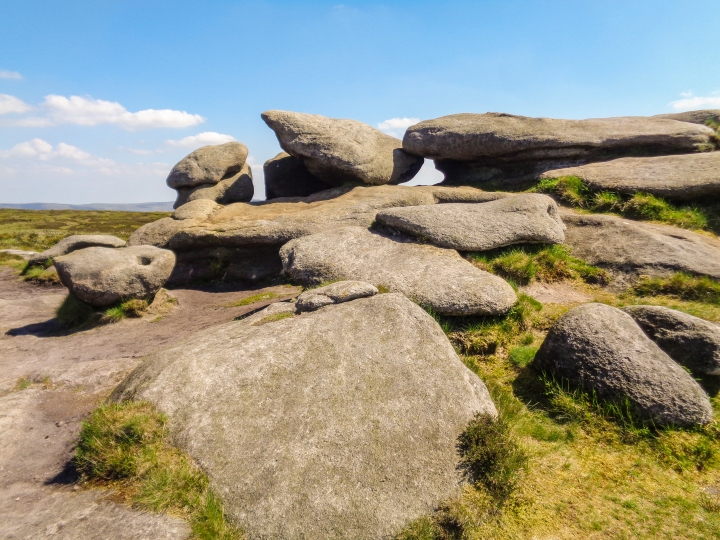 All in all, a successful days geocaching. Not bad for a newbie!