The Norfolk Coastal Marathon was held on October 31st between Weybourne and Sea Palling on the Norfolk coast. Held in partnership with Norfolk County Council, as part of the first ever Norfolk Walking Festival.

A linear marathon (or half) open to both walkers and runners, taking the challenging and dramatic Norfolk Coastal path.

A friend asked if I was up for the walk.  Having not trained for ages it would be a huge challenge. It would also however provide the perfect Halloween avoidance strategy – of course I was in! 😉 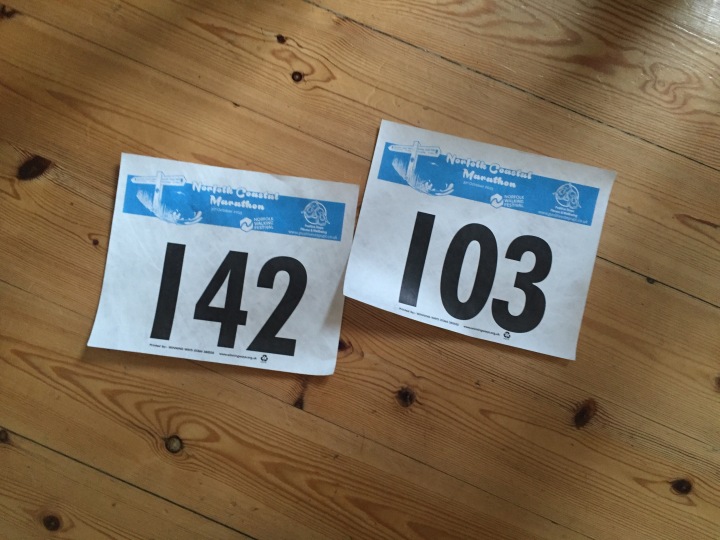 We were to start our day at stupid o’clock.  Exchanging tweets at some ungodly hour, neither of us having apparently slept much at all. Excitement would you believe?!

By sunrise we had driven to the coast and parked close to the finishing line. A coach was to take us to the starting line whilst we psyched up, attempted breakfast and realised how blooming far 26 miles really is.

The journey seemingly taking forever, my friend trying her hardest not to vom and me wondering what on earth I’d signed myself up for. Oh dear.

Eventually we arrived at Weybourne, vomit free and quite honestly knackered. These things always seem like such a good idea at the time….

The runners and walkers arriving at the village hall in a tidal wave of technical clothing. Stretches are undertaken, superfoods consumed and much discussion about achieving a personal best. Oh my!

It’s probably worth pointing out that, as ever I’m not taking things very seriously. I walk in comfort, in the type of clothes that would otherwise never leave the house. Jogging bottoms and hoody, the only technical thing about them is that they are technically speaking pyjamas. 😉 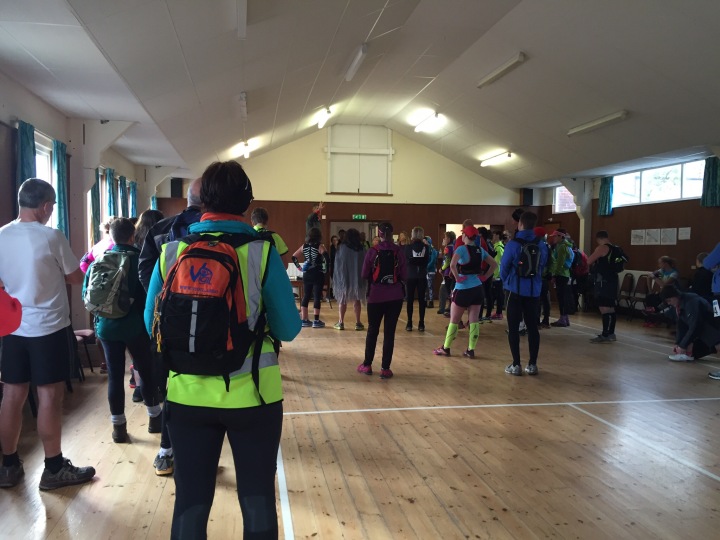 My preparation going so far as considering eating a sausage roll and checking my phone for geocaches along our planned route…oh I really would….

In my *ahem* wisdom I set up an app on my phone to alert me every time I was within striking distance of a cache, just out of curiosity of course.

Finally it was time to depart, with a wave of anticipation and excitement for the challenge ahead.  Then as I prepare to cross the starting line….this pops up on my phone.

13 m! Not distracting at all. Must resist!

Being a non-competitive type I was more than happy to loiter at the rear of the pack, we held a steady pace and concentrated on the challenge ahead.

We made good progress as my phone occasionally  alerted me to the fact we were passing by a cache. Several being highly favourited caches and in stunning locations. Keen to keep up the momentum though we simply powered past however with a whimper of ‘I bet it’s under there.’ *Sigh*

The route took in the coastal town of Sheringham. I have many happy memories of camping trips there with Mr Muddy back in our youth. Yes, I can remember that long ago. 😉 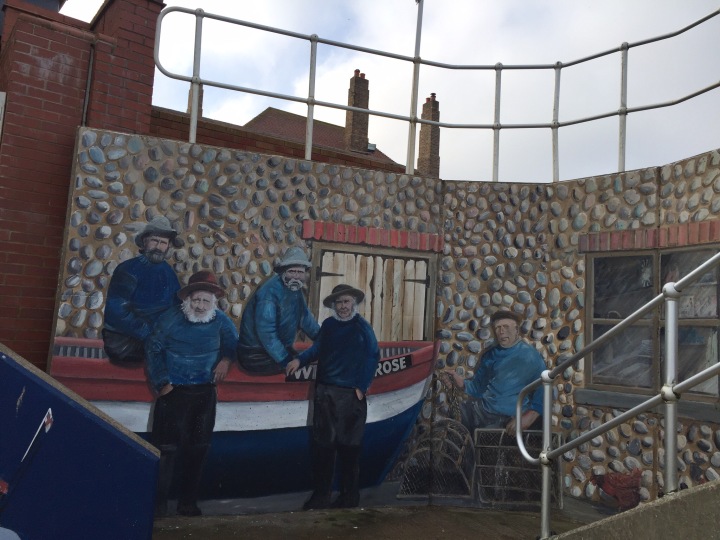 Less fondly however I also remembered the route over the Beeston bump. Now, it may just be me but the term bump conjures up images of a gently undulating landscape. Pfft!

I know this is East Anglia but the Beeston bump is a bit of a monster. However if I can manage it whilst slightly squiffy, I’m not going to let it slow me down during a flipping marathon. In fact there’s only one way to deal with obstacles like this – run up it!

With the bump conquered (and breath regained) we noticed that the pack had thinned considerably. With impeccable timing I was alerted to a cache just a few metres away. Enough was enough, time to get the caches out of my system. With the coast clear I grabbed the cache handily hidden on the back of an information board. With some rather sloppy caching etiquette my initials were quickly on the (unrolled log🙊) and we were back on our way.

<
From here we were diverted onto the coastal road, through the Runtons and past one of my favourite pubs….Could we not just stop?….. No?…Oh well….

<
We pressed onwards towards Cromer and the last of the destinations that I have visited before. We reached the first of the rest stops, but no rest for the wicked us. We powered past grabbing a handful of sweets and a cup of cola. Well, Hello sugar my friend… 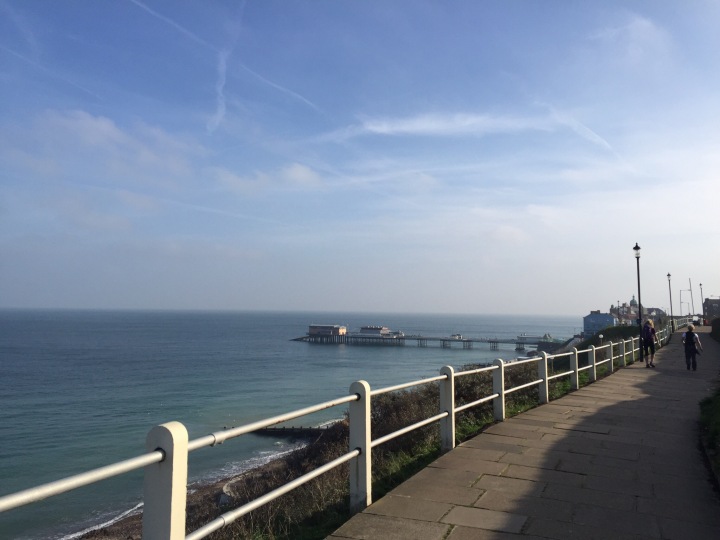 <
usually my biggest failing on a long walk is not eating enough. It seems to be the only time that I'm for once not hungry. Today I was determined that the resulting dip in energy wouldn't beat me. My backpack was loaded with food and I dutifully stuffed my face at regular intervals. Seriously, I must be the only person who has ever managed to put on four stone whilst participating in a marathon. 😉

<
Once through Cromer it was time to hit the beach. Walking over pebbles not a wholly pleasant experience on feet that are starting to smart a little. The benefits however of walking with a regular partner is that you become intuitive to each others walking ways. Without a word spoken we both broke into a run.

When the going gets tough, we get out of there. Fast! 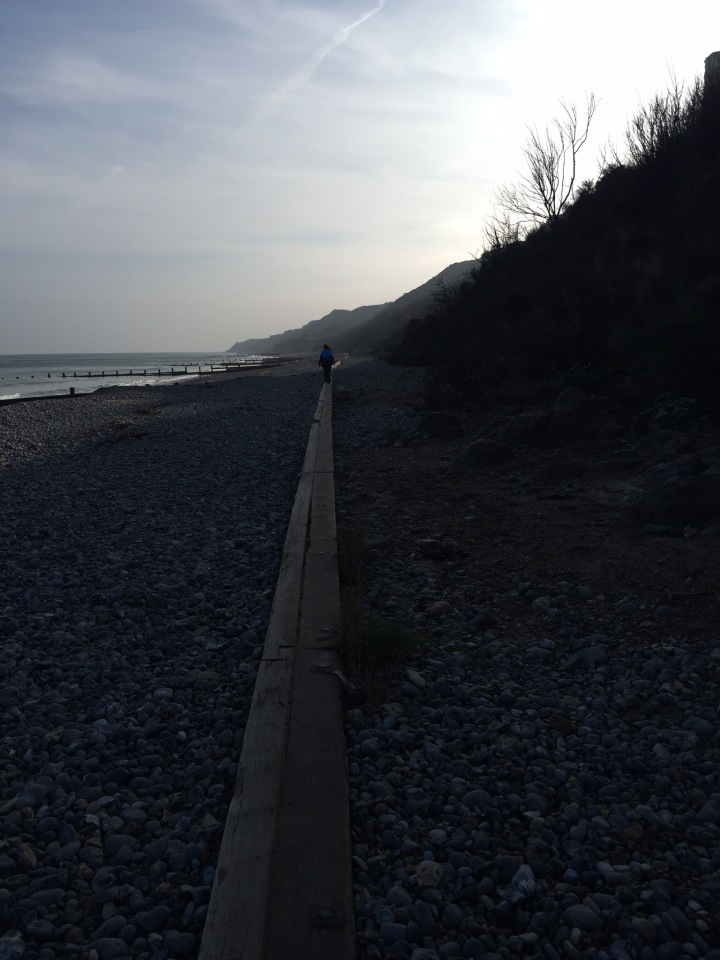 <
Thankfully it wasn't long until we were back on a footpath, although a rather perilous one at times! 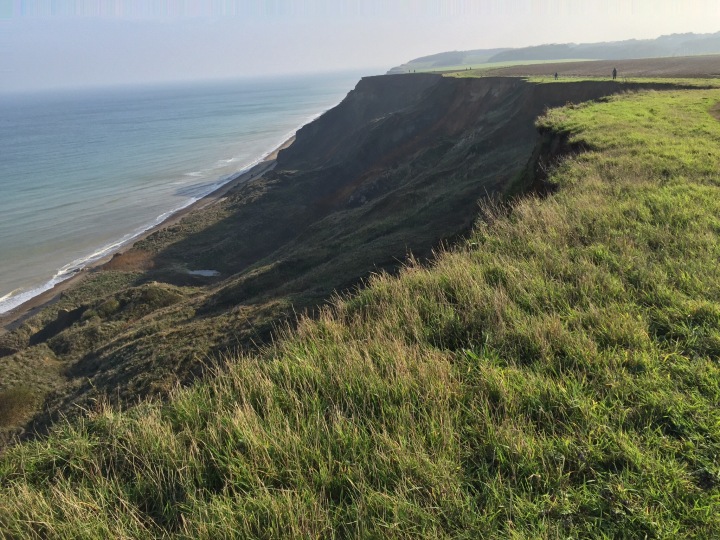 <
Then the satisfaction of reaching the halfway point and the pleasant surprise that we had arrived before the half marathon runners had set off. More sugar, a pee stop and the all important sock change. My hands always swell ridiculously when walking long distances, like an anemic shrek. Not attractive and makes opening your next chocolate bar a challenging affair. How tedious.

Always challenging to get back going once you have stopped, but of course we were soon snapping at the heels of the runners before us. 😉

Back on the beach once more, thankfully a nice sandy stretch this time. The choice to walk behind the beach defences on dry sand and fill our shoes or to walk the shore line. No brainer!

<
Seemingly good idea taking the damp route until we reached a crowd, waiting to navigate a rather impressive groyne at the lowest point. Being impatient at the best of times, now wasn't the moment to get all British and queue patiently.

Sizing up the best point to scale the epic groyne we went for an up and over technique, between leaping rock pools. The structure being covered in barnacles my fat, puffy, sausage hands now cut to shreds. Who knew marathons could be so hazardous? And glamorous? 😉 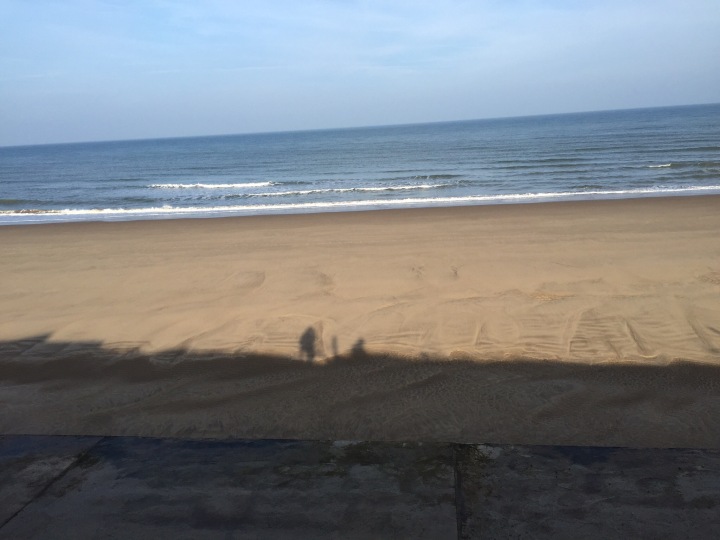 <
The final stretch of course more challenging as we began to tire, and our feet began to ache. As each mile passed by however a jubilant celebration that the full marathon runners hadn't yet caught up with us. Ok so they started a lot later but err running!

Then the sweet moment that we overtook a group of half marathon runners. Having realised they had been overtaken by walkers a token jog to get ahead once more. Soon however we overtook once more. They made light of the fact they had been overtaken by walkers, we smiled sweetly whilst they figured out the facts. 'You've walked the whole thing?' They cried incredulous. 'How on earth did you manage that?'

My cheeky response; 'Determination. And chocolate.' 😉

Now I may not be competitive, but my friend certainly is. Having maintained a decent, steady pace she was now determined we would power to the finish line. Overtaking every walker in our sight…. Now where did I put my sweets.

Power on we did, overtaking many on the last few miles. Once again on the beach. The largest stretch of sand I have honestly ever encountered. Stretching on endlessly before us. Finally the first of the Marathon runners catch up with us, spurring us on with the desire to just reach the end (and take my shoes off.). 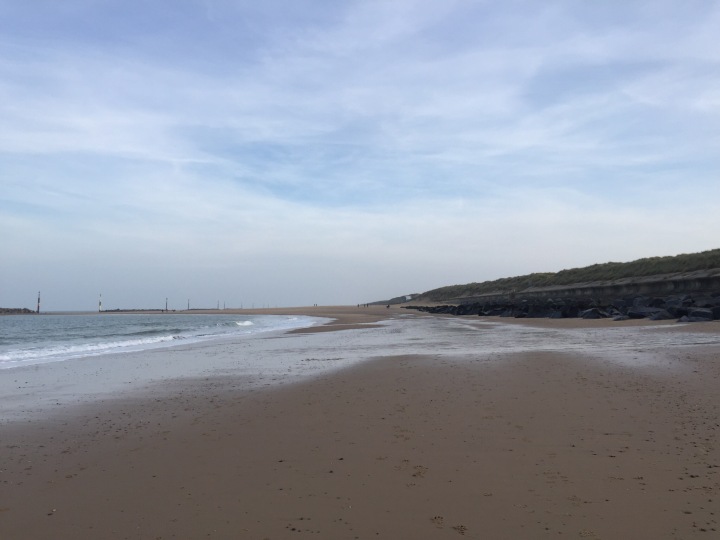 <
Fnally we reach Sea Palling. The end tantalisingly close. It really is a case of taking things one step at a time at this point, leading us eventually to the village hall, a nice shiny medal and a huge sense of achievement. Oh and not a pumpkin in sight! Marvellous!