A day out with my walking friend, now also my caching friend.

Squeezing one last day of fun and frolics before the children finish school. What on earth could go wrong?

Turns out quite a lot. Sometimes it seems the world is just trying to tell you to stay in bed.

Time was to be more limited than usual, being the end of term my children’s school holding graduation assemblies. Two in the morning, one in the afternoon.

Still however the bulk of the day to head out to play – let’s go!

The plan was to stay local, notch up some miles walking along the Ouse valley way, following the riverbank of the Ouse and grabbing a few geocaches as we went.

After dutifully applauding my way through two graduation assemblies we could head off.

Our destination the small village of Little Thetford near Ely. Parking up we switched on phones and GPSrs to see plenty of caches around us..nice.

The decision to walk first or cache first…I don’t need to tell you the outcome surely? 😉

Our first cache very close by and on the way to the river. Recently described as an easy find, this should mean a quick find for us and we are off on our way.

Geocachers will know though this is some kind of Hex by other cachers, the phrase designed to torment you.

With both the GPSr and my friends phone leading us In circles, the search hampered by storm debris from the previous night’s incredible storms. It would seem both of us had forgotten what our eyes were for.

Where on earth is it?!

Reluctantly we head on, feeling a bit crest fallen we walk along the riverbank whilst I send a sneaky tweet for help from a previous finder. The first Phone a Friend (PAF) I’ve used, but this one is bugging me. A quick reply tells us where to focus our search, we’ll have to try again later.

Whilst walking and chatting we soon cover ground along the riverbank, a gorgeously bright and fresh morning after the epic lightening storms of the night before. 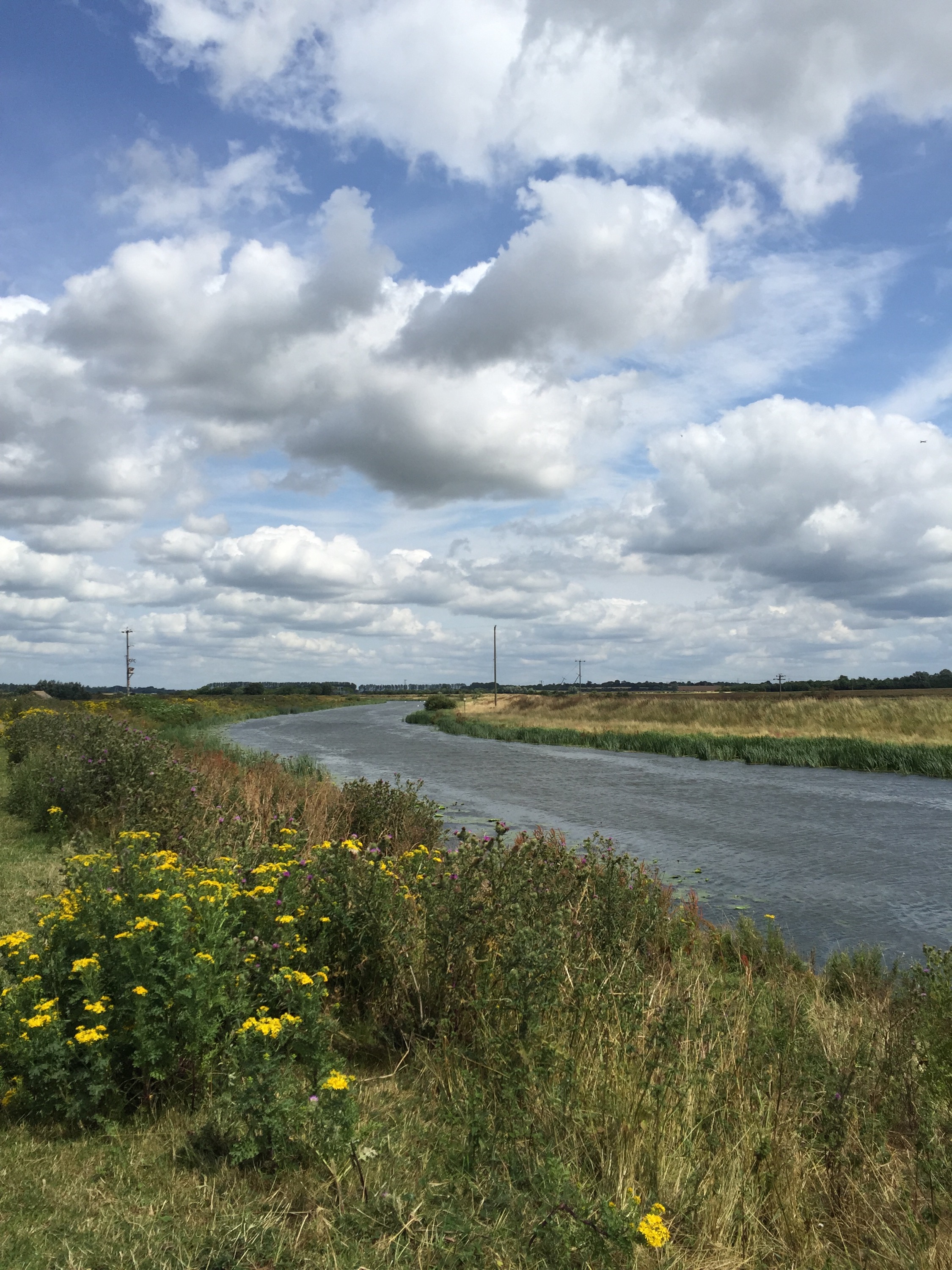 In fact we are taken by surprise when my GPSr beeps informing us we are close to a cache.

Very close to a cache only it’s down the bank, which is a vast wall of nettles. Oh!

Given that my friend is wearing a pair of shorts smaller than Barbies she doesn’t fancy picking her way through. I’m wearing jeans and I don’t fancy it either! Hugely annoyed we make the decision to not attempt. Drat!

A short walk along the path and lo and behold a mown path down the bank.

Hurrah! Could our luck be improving?

Luckily the cache was an instant find. It cheers us a little but the first DNF is still grates.

Travelling further along the river bank we reach a marina, I’ve never been here before – always fun to explore a new place. Some gorgeous houseboats to be admired including one called the Fat Bottomed Girl. I empathise.

Nearby is the end of a very new series of caches. Recently placed and sounding like easy finds – this should be six quick finds and then we can focus on building up the mileage.

What feels like three hours later we are still searching for the first blooming cache.

Seriously how are we not finding a base of post cache?!?

There are several posts but this should be a doddle. We are looking for a 35mm film pot at the base of a flipping post!

Only one thing to do, suck it up and ask for help. Again.

My friend who’s fairly new to caching but learning the politics fast points out the same cacher was first to find this cache as the last one we couldn’t find. In fact quite a lot of the caches we find. ‘It’s so and so Again. It would be!’

‘I bloody am!’ I wail in exasperation

I’m then given precise instructions as to which post.

We look again, still nothing.

Then I realise that the post is surrounded by grass cuttings, having been compacted by the recent downpours. Digging down and there it is.

Oh! Exactly where it said it would be. Tragic really.

Clearly we are such rubbish cachers we should give up now and just head home.

With our egos bruised we reluctantly head on. Our moods most definitely gloomy.

Thankfully things seem to pick up. We quickly find the rest of the caches and even return to the site of our first failing for a quick retrieval.

Hmm, I’m sure we checked there before. Surely someone sneaked it back when we weren’t looking 😉

Our luck seems to be on the turn. Hurrah!

We head off back down the river Ouse, towards Ely – a nice walk if a little overgrown in places.

With time limited its just a brief stop in Ely and then back again to the car. We should make it back for me to comfortably make my small persons assembly. No time for messing with caches though. Heads down and go.

We leave Ely and as we reach a crossing for the railway the worlds biggest (fact) freight train rolls up. We probably could have dashed in front. We consider. It’s stupid to do so. We don’t.

The freight train slows. Slows some more. It stops.

We patiently wait. Actually there’s nothing patient about it. I fidget. I swear. 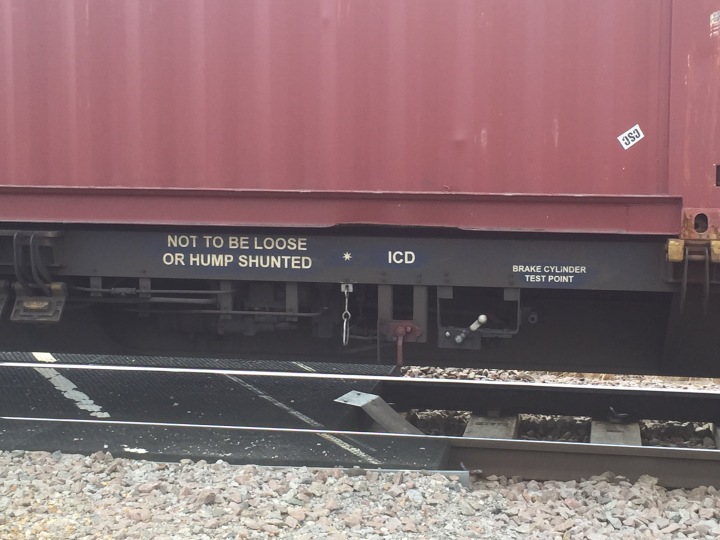 I kindly point it out to my friend, her of the tiny shorts. No hump shunting young lady. 😉

After five minutes of twitching and swearing the train rather noisily puts on its brakes.

The car now seeming a long way away never mind the  fact we have a train blocking the track which we can’t even see the end of. Noooooo!

Panic kicks in. I need to get to Ely and in a taxi. Now. Damn you Mr freight train.

I announce my plans and my friend decides to wait it out. Claim her car and possibly check out some hump shunting. 😉

I stomp the riverbank to Ely once more. All will be ok. I for once have bought money with me, I’ll make it back just fine.

I turn up at the station as the police tape it off. Oh crap. Emergency services are everywhere.

I text my friend. She needs to get here or she’s going nowhere, literally nowhere. I’ve got the taxi money.

As she runs the riverbank the taxi drivers fill me in on events. It’s not my story to tell, nor judge.

The drive to the car pretty uneventful. I should still make it. I’ve texted back up family but nobody else can get there. It’s got to be me. No pressure then.

The drive home a different story. Turns out the routes home are clogged up because of the numerous rail crossings. We sit motionless as I turn air in the car blue.

I feel terrible. The worst mother in the world. My smallest person’s first graduation and I won’t be there. Sure there are lots of parents with commitments who won’t be there. But I am always there.

At long last the traffic starts to filter through and my friend dumps me at the school road. Did I want to take my bottles of cider which is in her boot? Err no, running in late = bad! Running in late clinking….I’ll pass!

I run in just as my daughter’s lip is starting to wobble. Late but I have made it.

Turns out she’d managed to convince her friends that I had died!  Maybe the only way she could make sense of why I wasn’t there. No wonder she looked so pleased to see me.

Her friend’s parents in stark contrast looking completely shocked to see me after the weekend after their children had told them I’d croaked it. I’d wondered what I’d done wrong until the teacher took me to one side to explain.

All in all terrible caching results, rubbish walk training and a whole heap of stress to boot.

One day I’ll go out, things will go to plan and there will be no calamity of catastrophe.

Only then I’ll have nothing to write about… 😉

10 thoughts on “The day I should have stayed in bed”