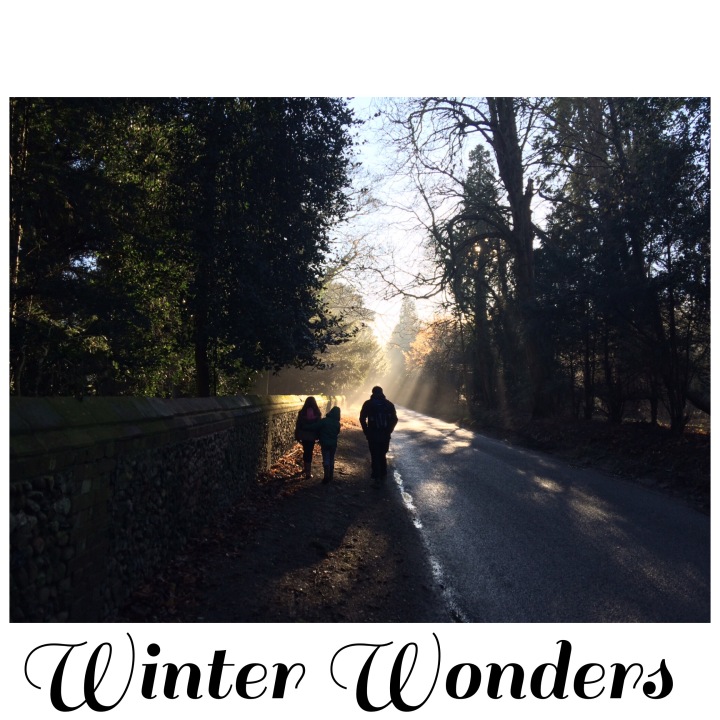 I struggled with the title for this post. At first it was Winter Wonderland but that just made me think of ‘That’ place. *Shudder* (No. I’ve never been, sure it’s great really, just sounds like my idea of hell.)
Then it was a toss up between a winter wander and a winter wonder. Both equally fitting. A lovely walk exploring a new place, but what tipped the scales were the wonders we discovered within this new park. At times I was truly blown away by the setting we were in. A truly lovely place.

However our discoveries it would seem would go from the sublime to the ridiculous. I now have a new favourite phrase #randompanda, you’ll meet him later. Hmm maybe I should call this post Random Panda….

Blimey I’m rambling already, probably best to put the kettle on before I really get going.

So as I mentioned already we discovered a great new park. Nowton Park near Bury St. Edmunds to be precise. Now I’ve made a conscious decision to try and not talk so much about Geocaching. My intention was never to write a Geo blog but the truth of the matter is I’m discovering all these wonderful local places thanks to this hobby of mine. We first heard about the park from the Cache owners (That’s the people who place and maintain the caches) when we met them at a geocache near home. After I helped them find the cache (Stealth boast 😉 ) they told us about the trail they had placed in their local park and we promised to look it up one day.

With the Christmas break ending we booked a final trip to the cinema and with a few hours to kill beforehand headed over to Bury to finally give the trail a bash.
First impressions were positive, for a start good parking – hurrah!
Secondly a play park, automatically lose half an hour…;)
Most importantly a toilet, a rare occurrence in these parts. (No I do not pee in bushes if that’s what you’re thinking.) and then the icing on the cake – a coffee shop! (Cappuccino to go if you’re asking….)

Play park exhausted I switch on the GPS and things get a little complicated. Having looked at the trail online it looked logical. Try parking in the car park and then noticing that cache #1 is pretty much the furthest point away, and that several parts of the trail are outside of the park in opposite directions. Eh?! Plan of attack has to be nearest first rather than in numerical order, a strategy that makes Mr Muddy a little twitchy….and I’m in trouble again! 😉

We head out of the park and are soon strolling country lanes and finding caches. One we failed to find, a multi trunk tree yielding no cache, I climbed the muddy bank to check which of course ended with the obvious outcome. Muddy mum had a muddy bum!

Returning to the park via a sneaky wall jump 😜 and things started to get interesting. It was quite a trek to the next cache but well worth it, the path took us through a part of the park that hinted at faded grandeur. Decaying structures which alluded to former well tended gardens, but left to be reclaimed by nature becoming stunning in their own right.
The cache itself, placed in the rubble of the ruins of a Folly.
Genius placement, a truly delightful spot and a well deserved favourite point from me. 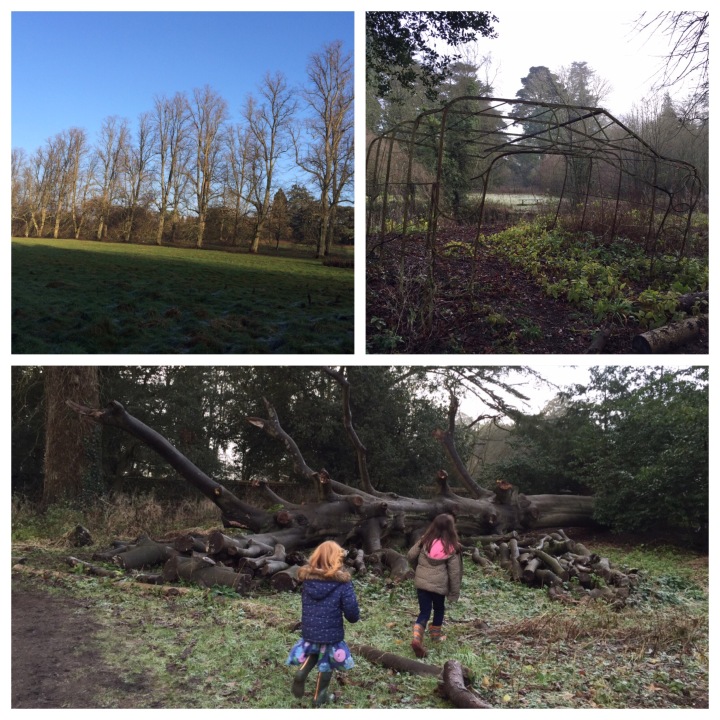 We head to the next cache taking in the winter landscape.
We pass an absolute whopper of a Totem pole looming in the fog. Random.
I have high expectations for the next cache.
The hint suggests nettles. It’s Winter, I laugh in the face of nettles!
Mwah ha ha!
The hint wasn’t wrong. Nestled in a pile of logs surrounded by what in summer must be an epic jungle of nettles. Oh!
Not a favourite point. 😉

We venture further into the park, the children climb felled trees and explore rings of tree stumps which have taken on an almost mystical quality in the prevailing fog. Our next cache highlights the true eccentricity of this park. The cache itself placed in a fir tree but next to a rather unusual focal point. Welcome to the stage, Random Panda. A rather ugly chap, crudely carved, in bright monochrome glory and sporting a gaudy, bedraggled piece of tinsel. To really showcase *ahem* this piece, he’s joined by a rather sorry looking bamboo crop. 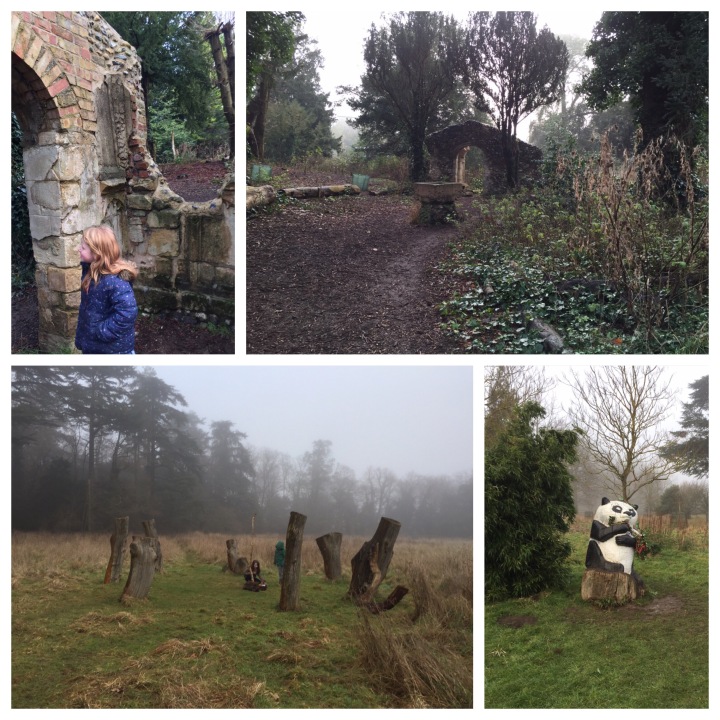 While I admired 😉 the panda, the boys had been scouring the nearby tree to no avail. Rather satisfying to walk to the tree and pluck the cache straight from the branches. Muddy Bum saves the day! 😁

We managed to grab one final cache on the way back to the car but the rest will have to wait for another day. We still have many areas of this eclectic park to explore so will definitely be back. Without a doubt my most random day of caching to date but what a fantastic place to discover.

Follow Mud and Nettles on WordPress.com
Join 1,492 other followers