I live in a rural town and love the fact that I only have to walk for a few minutes and I can be in the peace and solitude of the countryside. I’m most definitely a country bumpkin at heart.
That’s not to say however that I don’t love being in a busy city. I love the hustle and bustle and anonymity of city life. I could while away hours people watching and gorging myself silly on decent coffee. At least until I shake.

We live near Cambridge, which as cities go is pretty special.
Having been born there, educated there, and spent most of my working life there it becomes easy to stop noticing the understated magnificence of your surroundings.

A usual trip to Cambridge involves work, or shopping but recently we decided to spend a day there with no plans. To be tourists at home and to show the children the wonders of the city in which they too were born.

My only requirement for the day was to drop a trackable I had. A rather special trackable in the shape of the Starship Enterprise.
Don’t get me wrong I’m no Trekkie and spent most of my childhood whinging at my Dad to turn the damn programme off, but this travel bug was impressive. And a whopper! At the very least it needed an Ammo can and luckily I know of a huge cache hidden by the Millpond in Cambridge.

We spent the day exploring, wandering and generally soaking up the atmosphere. We grabbed caches as we passed them.

Given that most of our geocaching finds are forest based or in the middle of nowhere we are usually free to search and rummage at our leisure. I generally refuse to search if there are people around, adopting the tried and tested ‘nonchalantly leaning against the tree checking my phone’ pose.
There’s no denying that at best you look incredibly suspicious geocaching, at worst just plain weird rummaging in bushes and fondling trees. In the middle of nowhere though that doesn’t matter. The nearby field of pigs certainly aren’t going to mention it.
In the city however there are of course people, lots and lots of them. The challenge here is finding the cache without getting arrested.

Our first cache of the day was in a particularly busy spot (See the photos of the brain like blob…) the description hinted at it being on a bench.
Oh joy! People sitting on the bench.
How dare they?
We dutifully wait for the family to leave and then swoop in.
Nothing.
I bet the cache owner thinks they’re hilarious!
Luckily we established that the cache was magnetic which helped us to pin down the location as neither phone or GPS were much help here.

Our next cache was a Multi. For those non caching folk (who have bravely hung around long enough to get this far – thank you!) this is a cache which involves you visiting different spots and answering questions or gathering numbers which then will help you to find the final location of the cache. I’m not the biggest lover of Multis, a little too much like hard work for me but this particular one was fairly brief and close to another cache we were keen to find so gave it a go. Luckily it was nice and short and soon done and dusted.

Now for the good bit. Tree climbing time. I find it incredibly ironic that we spend most of our caching time in forests yet our first tree climbing cache is in the middle of a city. In fact Cambridge is home to quite a few tree climbing caches. Odd.
If I’m honest I knew I would never get a look in on this cache. Mr Muddy is I swear half monkey. If there’s a tree, he’s generally up in it.
This tree however was right in the middle of the city, on probably the busiest crossroads in the city. There is no being discreet here. Climb up and get on with it.
So he did. Up he went, much to the amusement of the traffic on both sides.

The cache was placed far out on a limb with quite a precarious stretch to retrieve the log. Mr Muddy however was soon signing it and taking much amusement at the illegible, wonky scribbles of previous cachers.
The tree itself is located handily right in front of the fire station and given that I have a firefighting cousin based there I’m rather glad that Mr Muddy was able to get himself efficiently out of the tree without me having to have to ask to borrow a ladder. 😉

Cambridge is of course famously a city of education and full of lots of rather clever bods. (I fit in well! 😉) Not so surprisingly there are a lot of caches which involve solving a puzzle first.
Some of these are really quite taxing – I should know I’m currently determined to solve a rather tricky beast of a puzzle, but more on that another day. It seemed a shame to be in Cambridge though and not find at least one. Lazy sausage that I am I chose the easiest and after googling a few facts about Cambridge soon had a set of coordinates and the cache found.

There was one cache of the day which proved to be elusive however and that was placed in tourist central. Essentially in front of Kings College Chapel, surely one of the most iconic college buildings out there. We had the briefest of peeks but even out of season it was heaving and sometimes it just doesn’t seem worth it.
That didn’t stop us enjoying some rather lovely sunset views though. 😊 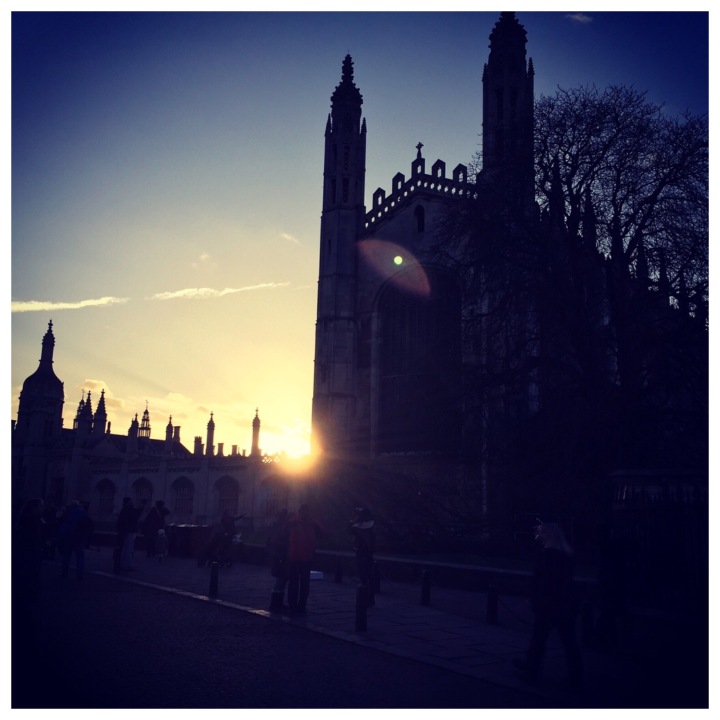 We spent the rest of our day leisurely meandering, taking in the sights that we usually take for granted and enjoying our home city with fresh eyes. 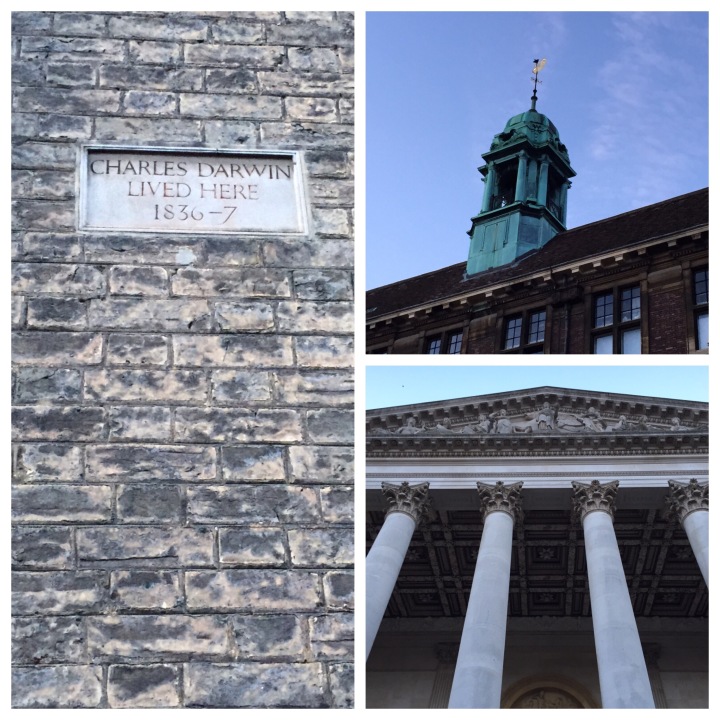 Our day ended with a quick trip to the Millpond to finally deposit the uber trackable. The Millpond as well as being a rather lovely spot, also happens to be home to some rather nice restaurants. Coincidently it happened to be Dinner time. Funny that! 😉

8 thoughts on “Caching in the city.”