“The Yorkshire Three Peaks Challenge takes on the peaks of Pen-y-ghent, Whernside and Ingleborough, in under 12 hours.

These peaks form part of the Pennine range, in the Yorkshire Dales National Park. The route is approximately 24-miles long, and includes 5,200ft (1,585m) of ascent.”

Piece of cake for a girl from the fens then. 😳

The opportunity recently arose to join some other members of an Outdoor bloggers group I’m a member of for a weekend adventure. Camping in Yorkshire and undertaking the Y3P challenge.

My head offering a strong argument as to why this would be a completely ridiculous idea. Strangers, camping alone, bloody big hills. Nope, nope, nope.

My heart however strongly believes that the magic really does happen when you dare to step outside of your comfort zone.

So before I could talk myself out of it, my space was booked and a shiny new tent was ordered.  😬

An arduous journey oop north, a terrible night’s sleep and I find myself bright and early stood in the pouring rain and wondering what on earth I’ve got myself into.

However once you start these things it’s fine. The nerves fade away and the task is taken to hand.

With the weather forecast looking proper grim I’m taking no chances and embraced the layered look. In fact so many layers, I’m positively round.

It’s fine, I won’t need to walk down any hills, I’ll be able to Zorb down.

The route from the campsite taking us swiftly into the ascent for Pen-y-ghent, no messing around here.

As we quickly progress we walk into the worst of the weather.

Visibility is poor and Pen-y-ghent more of a looming presence as we battle with wind and torrential rain.

A fun climb to the top but with plenty of people about I’m soon separated from the group and contemplating a solo challenge.

At times on hands and knees (short girl problems) I scramble up the rocks, but soon I’m at the top. 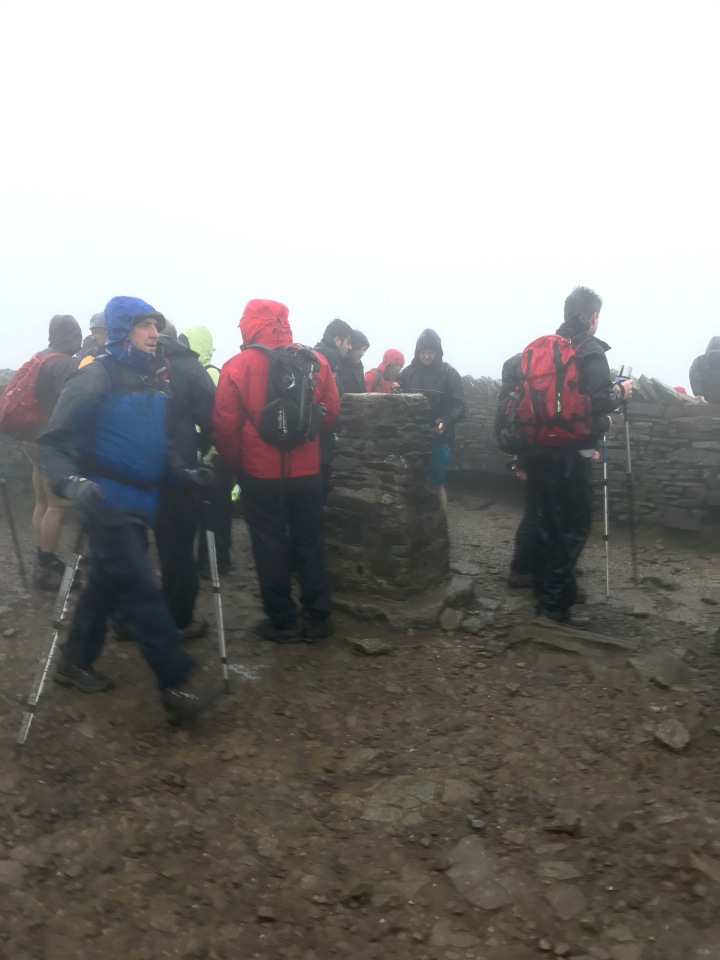 A moment to embrace the elements and drink in the view. 😉 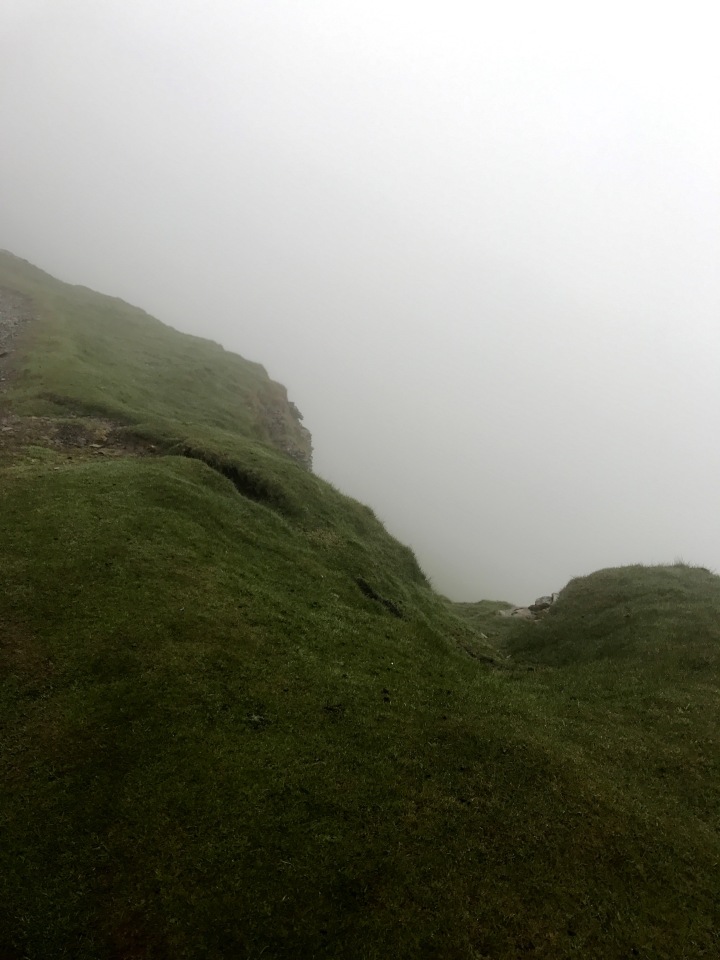 I’m soon reunited with some of the group and together we walk the gentle descent.

A relatively easy section of the walk, meandering gently over rolling countryside.

The rain begins to ease a little and some cracking views are starting to appear as the cloud clears. 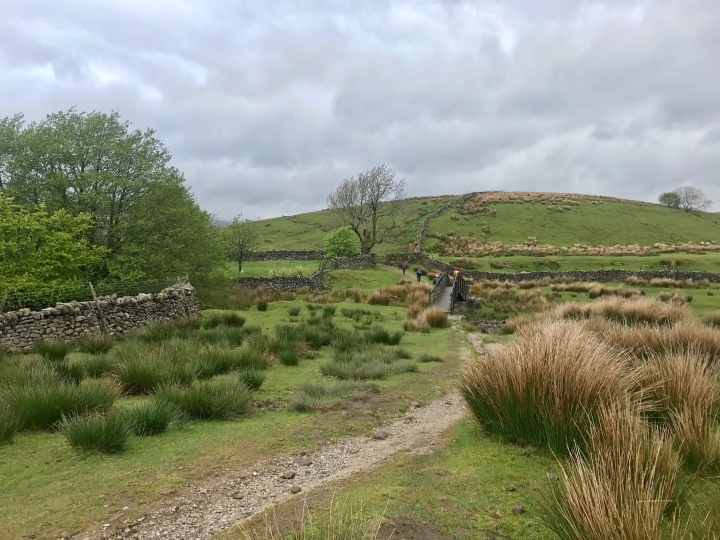 Far away in the distance the iconic Ribblehead Viaduct begins to come into view.

It’s one of the parts of the walk I’ve been looking forward to experiencing and having a goal to focus on helps us to make steady progress through the dales.

With the easier terrain the chance to cover some ground and so I break off on my own once again. I’m slightly dubious about doing so as my usually trusty GPS has refused a gpx file of the route. I do however have a backup paper map and compass, which at the very least I can burn to keep me warm if I get completely lost. 😉

A steady stomp along the route and suddenly civilisation looms. The viaduct, people, even refreshment opportunities.

Even more to my surprise, familiar faces. Until yesterday a bunch of internet strangers. Today I’m thrilled to see them.

With no inclination for refreshments (Yep, still an idiot incapable of eating whilst walking. 🤦🏻‍♀️), I do however take the opportunity for a quick sock change. Having wrecked my feet on my recent Peddars Way challenge, I’m taking no risks this time.

Job done and it’s back to the challenge.

The Viaduct living up to expectations and providing quite the backdrop as we oh so slowly begin our ascent up Whernside. 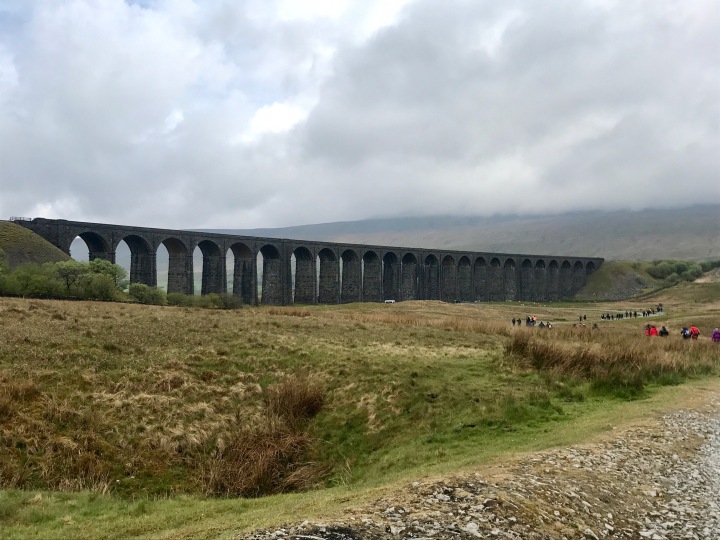 Having been warned about this one, it soon lives up to its reputation.

A long and gradual ascent that goes on and on and on. It’s hard going but by now I’m on autopilot.

Although of course it would be rude not to stop for the odd breather photo opportunity. 😉

Then finally the path starts to level out. Second peak, consider yourself done. 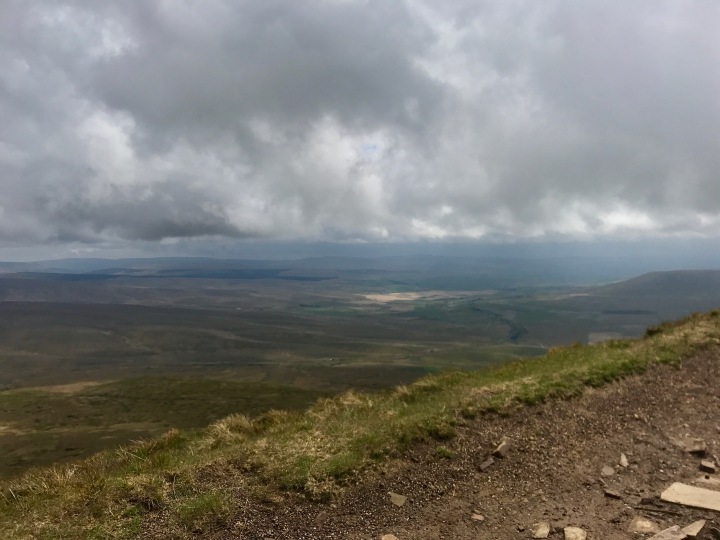 With the weather having now much improved and feeling like significant progress has been made it seems only right to celebrate with a cheeky cache. Besides, it’s a T5 (high terrain rated) cache, and the first T5 I’ve attempted. It’s a beautiful moment people.

Actually, no. It’s a bit weird.

I’m joined by another blogger Mark, who knows all about my caching obsession.

So. This is it. This is what all the fuss is about. A fairly grubby Tupperware box hidden under some stones.

You either get it or you don’t right?

The fun bit of Whernside however is to be found in the descent.

Steep, rocky and challenging paths. Let’s not forget I’m a Mountain goat. An ironic one. 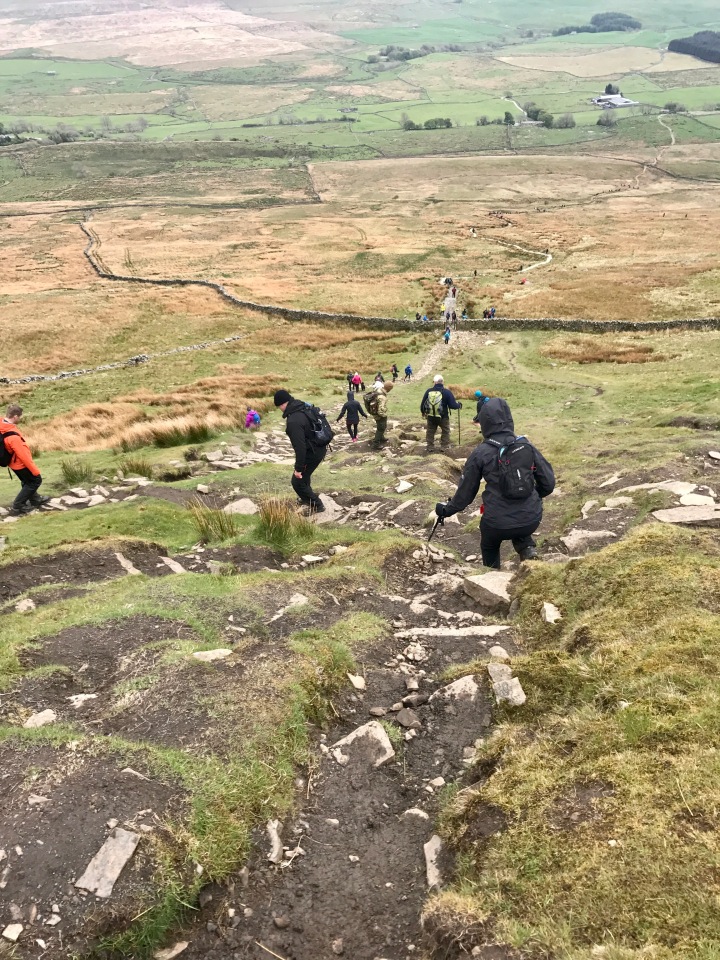 I stumble and trip my way down, get halfway and impulsively decide I’ve had enough of wearing my husband’s (shh don’t tell him) ridiculously huge, waterproof trousers.

Treacherous path or not, when a girl decides her trousers have got to go… off they come. Even better, limbs remain intact.

Whernside however has taken its toll on me. Having eaten only a tiny slice of flapjack and a few wine gums my energy levels unsurprisingly crash. Dammit.

However the brief respite between Whernside and the final ascent up Ingleborough comes with a super swanky dubious refreshment stand. I order coffee and gratefully receive indeterminate brown liquid. Who cares though when you are tipping a tonne of sugar in it. Better still I get to sit down on a nearby wall to drink it. Luxury.

That’s not even all, excuse the overshare here, but for the first time ever doing a challenge walk I actually get to have a pee. Freaking awesome. 😜

I force half a snickers bar in my face and as we set off back along the road, I’m flying. Well for the first 500m at least. 😉

And then Ingleborough comes into view.

It looks a bit steep. Never mind the fact at this point you can’t even see the worst of it.

Back to head down and getting on with it.

A wide, well maintained stone path leads the way, this however has little effect on my ability to stay upright.

After several pretty impressive trips, gravity wins and I’m down. Fortunately I manage to just catch myself at the edge of the path, teetering over the edge of a sodding bog. Phew!

The path steepens, my lungs bursting (Come on, I’m an asthmatic fen dweller!) and I’m now running on empty.  Hauling myself up the steep, rocky path with every last little bit of determination I have. 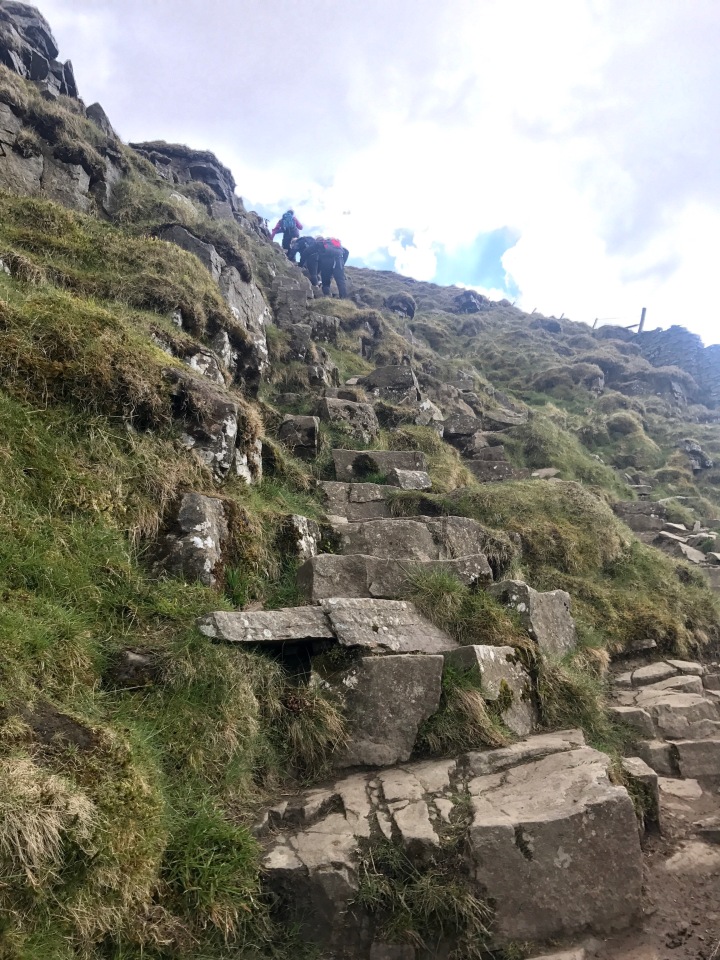 With hindsight I can be amused by the fact that I’m joined by Mark who blogs at hillexplorer.com. The clue is in the name and he’s merrily skipping up the hillside in the manner of a non-ironic mountain goat.

All whilst I’m dying a thousand dramatic deaths, trying my hardest not to puke my guts up and calling him a few choice names. Oh the shame. 🙈

Somehow I muster the energy to scale a large, steep section of the path. I’ve since seen video footage which whilst deeply traumatic, I’m surprised at how quickly I did it. However at the first available clearing to stop, I do. Collapsing flat on my back, a hot mess and I really couldn’t care less.

In fact this is the image that sums up the challenge for me.

Flat on my back, a cracking view from between my knees. I’m so damn classy. 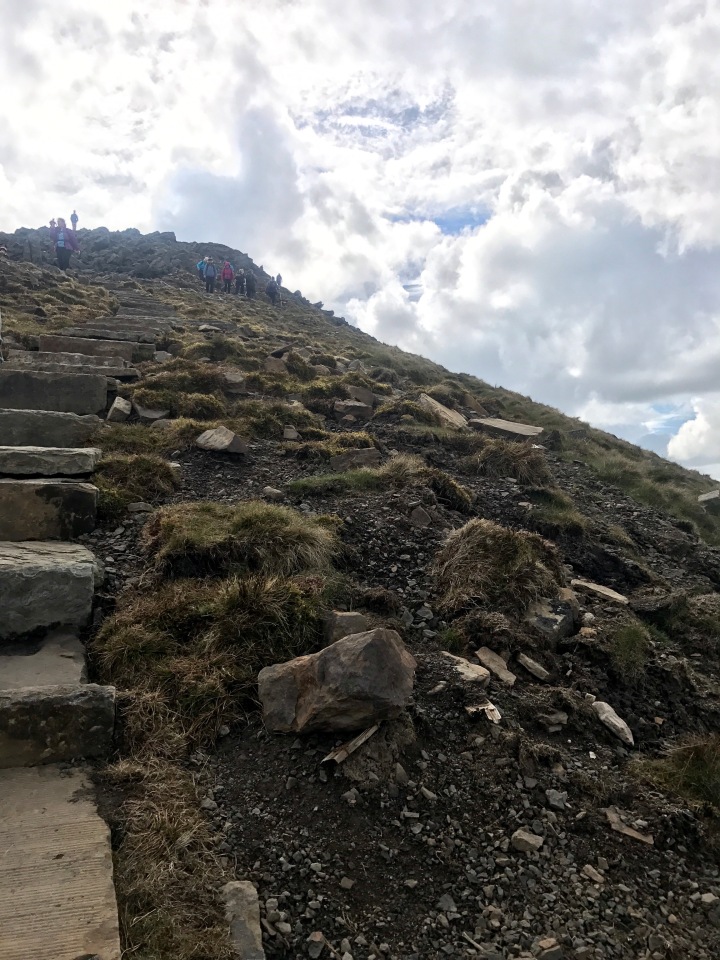 But the end is in sight.

The final part of the ascent.

I can bloody do this, well once I’ve stopped to ditch more layers that is.

Then suddenly, there it is.

The top of Ingleborough. The third peak conquered.

It’s windy and wonderful and I feel like I’m on top of the world. Well I am East Anglian.

With several miles still to cover to complete the challenge but of course it’s downhill. An easy stroll as I dream of chips, cider and a shower. Any order’ll do.

A proper challenge which pushed me to my physical limits, but what an amazing experience and one I’d happily repeat.


You know what? I nearly did too. Only in true Clare fashion I had exciting caches to find instead, but that’s another story.