After our productive first day (the GPSr tracked us 30 miles.) we stayed the night at the Ostrich Inn in Castle Acre.
Fed, watered and rested we awake somewhat broken. As we hobble around our room, quite unsure how we can even walk to the bathroom, let alone the final 16 miles.

We continually reassure ourselves we will just do what we can. Each step in the right direction a bonus. I don’t think either of us really expect to reach the end of the road though in all honesty.

After a quick breakfast we decide we’ll have a go. So with one painful step at a time we set off through the village of Castle Acre.

As we leave the village behind a chance encounter with a lady on a mobility scooter.

Never before in my life have I ever remotely considered robbing an elderly lady, but that scooter looks seriously awesome. We even confess to her our plans but oddly she seems to think we are joking…

Ok, obviously no elderly ladies were harmed in this adventure, well apart from us anyway. 😉 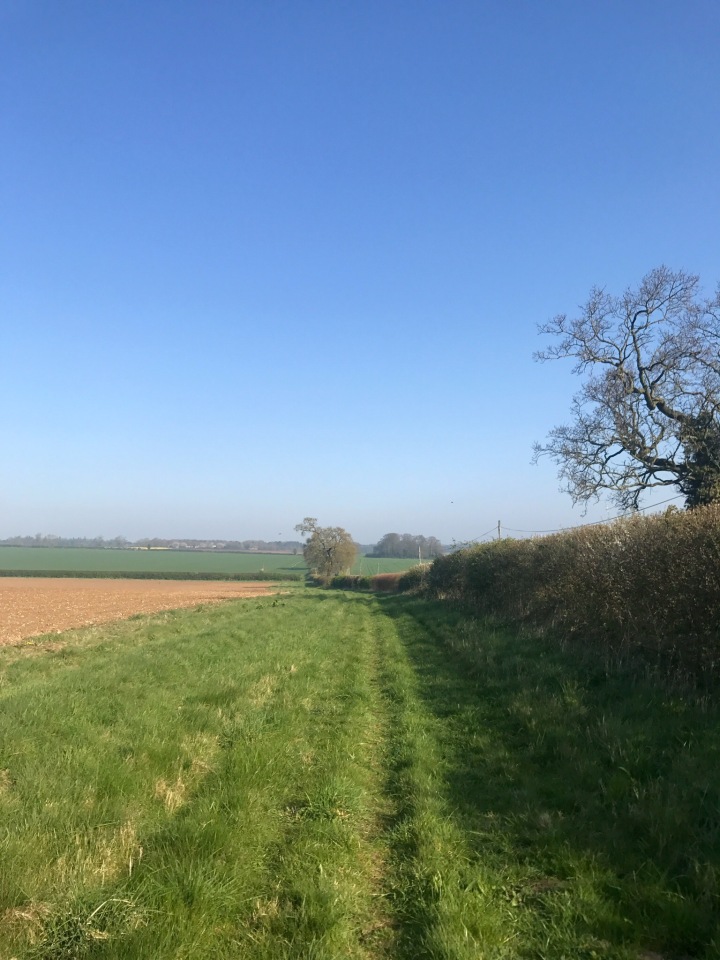 We decide to set ourselves a small goal. One step at a time was proving achievable, but we need something to aim for. The perfect target; a string of caches about 7 miles away. Like I said, just a small target. eeesh.

However if we can just make it to those caches, the distraction might just help us make it a little further.

Much to our surprise, we do eventually reach the first of the caches. Nothing too challenging thankfully, although in our weary, sore state we make much harder work of finding than was necessary. 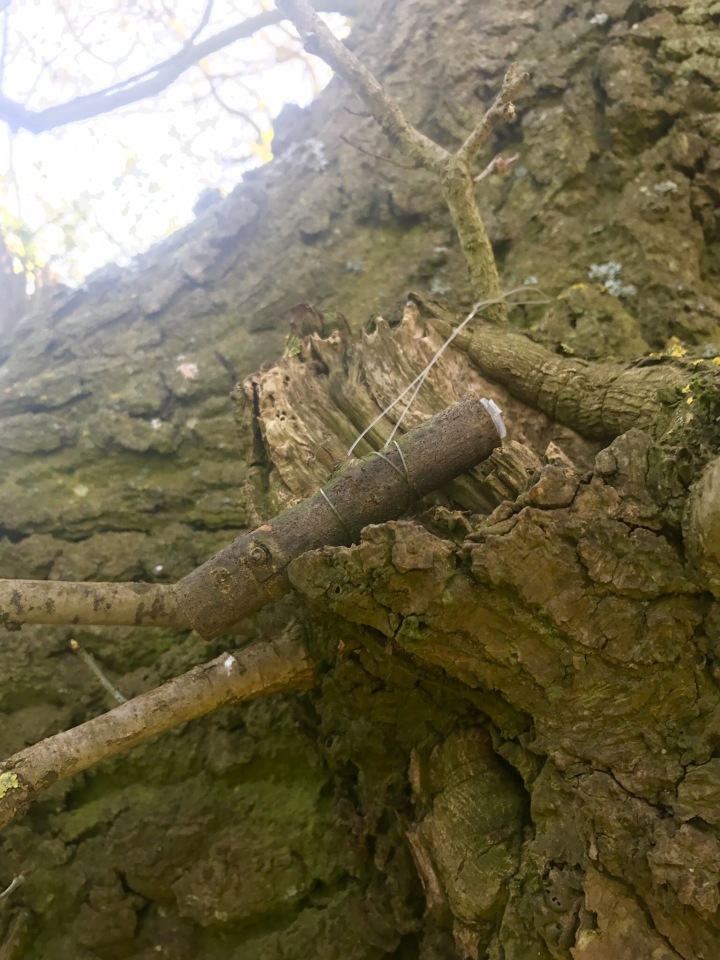 With a few caches found my friend begins struggling with the stopping and starting and our progress slows. We decide to just press on, ditch the caches, especially as the sun is now getting much higher on what would turn out to be the hottest day  of the year.

We trek on for a bit, but there was however one more cache I want to make sure I find. A challenge cache. There’s Irony right there hey?

A challenge cache is a rather rare cache in my part of the world, a cache which requires you to meet a particular challenge before you can claim the find. In this situation, a names challenge. The requirement was to have previously found caches with names which start with letters in a particular order, yet also chronologically.

Blimey. Luckily I qualify and this was to be the first challenge cache I’ve encountered, let alone found. Having been through the effort of meeting the challenge requirements I was keen to make the find.

Fortunately I have no problems with the find (well only some minor bloodshed) gaining the Peddars Way challenge cache whilst undertaking my own personal Peddars way challenge. Get me.

Anyway, I digress. We’d been recently advised that this was the nicer section of the Peddars Way.

You know what?  They lied.

Narrow, straight, hedge or field lined lanes. Stretching on and on and on. 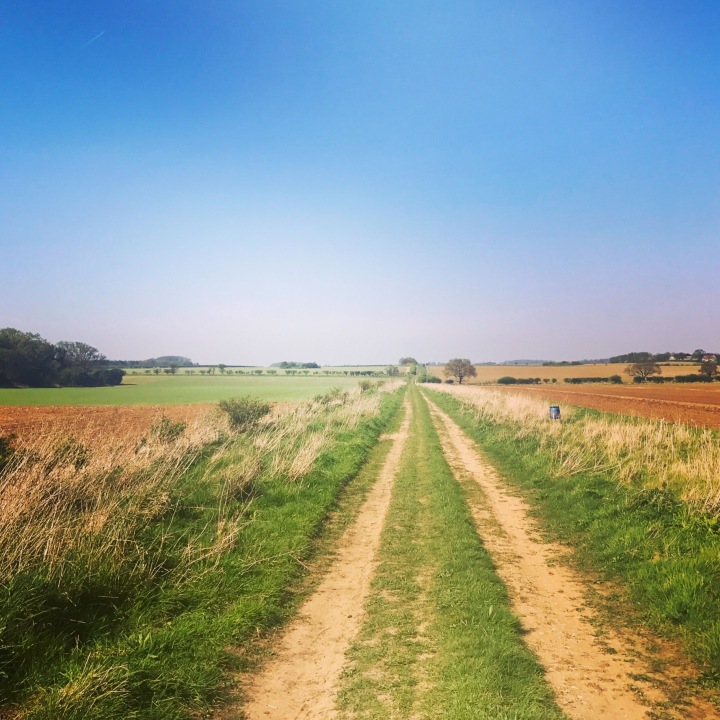 Previously I used to think the Romans and their roads were pretty cool.

Now, not so much. I’d even suggest they were possibly lacking in imagination and I can’t help but wonder if their funky sandals chafed quite as much as my boots are at this precise moment in time…

In all seriousness though, the straight paths do make the walk an absolute doddle to navigate.  Impressively well sign posted, you could easily follow the path from start to finish without a map, just a moderate sense of direction.

As the path starts to take in some gentle, rolling hills we can’t help but feel a little cheered. Progress feels like it’s being made and walking up and down makes a positive variation to dead straight.

The heat however takes its toll. There is unfortunately nowhere to stop, to refresh or seek shade.

It’s safe to say we are at breaking point.

Then suddenly we are joined on the path by a man walking his dog. He asks how we are and enquires how far we have come. He seems most surprised when we explain the whole route so far, clearly we can’t look quite as wrecked as we feel. Or maybe he’s just being polite.

We explain how we are ready to call it a day and ask where the nearest village is in an effort to plan an escape route. He however surprises by explaining that we’ve nearly finished. Apparently we are nearing the end of the route, albeit with a fairly big hill to conquer first.

It’s the boost we need to continue, we take on the hill and amazingly survive. The end of the trail is in sight on my GPS. If we weren’t quite so ruined it would probably even be exciting.

We reach the next road and my friend collapses in an exhausted heap at the side of it.

An ideal opportunity to sit down for a moment.

I quickly point out we seem to be sitting on a fairly big ant’s nest.

The look I get in response makes it pretty clear the chuff she couldn’t give is pretty damn huge.

She has a point.

A plan is needed.

Limits have been reached.

The end of the walk is tantalisingly close on the map on my GPS, but so it would seem is the nearest pub. Oddly about the same distance as our destination.

What does the self respecting, challenge taker do?

Plough on through regardless to the official end of the Peddars Way?

Of course she doesn’t, she makes her way to the pub instead. 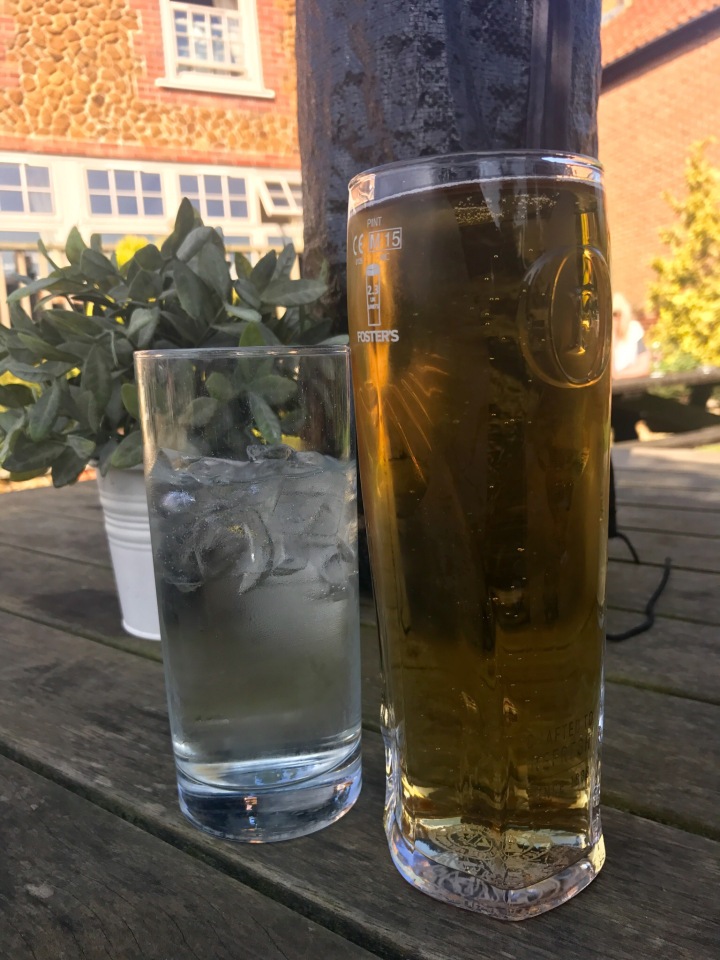 Try walking the Norfolk Coastal Path instead, it’s so much nicer. 😬