I’ve cached in London a couple of times previously, both occasions a very impromptu affair. Merely checking for the nearest cache, caching for speed and efficiency.

The result on both occasions a magnetic film pot fixed to a toilet utility box, pretty grim and leaving me wondering how on earth such caches were deemed quite so favourite point worthy.

My latest invitation to London for a casual Drop-in event meant however I could have a little more time to play.

I could casually jump on a train and enjoy a day of dog and child free bliss.

With the kids dropped off at school it was very much time for the great escape.

Dropped off at the station by a nervous Mr Muddy who insisted I take my pointiest umbrella, in his head it resembling the finest Katana. I’m sure my combat buddies will happily verify my sword wielding skills are quite the envy of any self respecting samurai. 😉

Anyway I digress, armed and dangerous I was on my way to London. Woooo!

My main aim for the visit was to bag myself a webcam cache, having helped a friend to get one recently I’d seen how fun it was. Webcams however are few and far between, to claim the cache you must get yourself pictured on the webcam. The closest webcam to my venue was positioned at the iconic Abbey Road Recording studios.

I’m sure any cacher will tell you that grabbing a cache which is ‘on the way’ to your destination is quite a loose term,  give or take five miles or so.

Or on this occasion, three tube line changes. Absolutely on my way. 😁 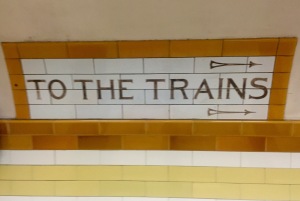 For such an iconic cache though it was worth it.

A short walk and there I was on Abbey Road itself.

They say you learn something everyday, well this was the day I was to learn how flipping long it takes to cross Abbey Road.

What with people replicating silly poses much to the disgust of London drivers, or London drivers pre-empting such nonsense and refusing to stop.

Time to unleash the katana.

To step out boldly into the road with a glint of ‘I will take you down sir if you do not stop.’ in your eyes.

Thankfully I lived to tell the tale and so it was time to hustle for the webcam position. Surprisingly busy outside the studio, my death glare was to come in handy once again.

Claiming the cache is made pretty effortless with the Abbey Road webcam app on your phone. It can be downloaded direct from the cache page. Pretty easy to take a screenshot of yourself in situ. You are however meant to raise one hand in the air  with your GPS to claim. Pretty tricky when using your phone to view the webcam. I made a halfhearted attempt enlisting Mr Muddy to capture an image, offering him a wave across the many miles that separated us.

He sent me back the same image I already had.

I pointed this out.

Someone has just booked a date with my brolly katana.

Anyway here it is, my own iconic Abeey Road image. If you squint you’ll just about see me bottom right hand corner.

From there on it seemed sensible to head across to where my meeting was scheduled, close to Covent Garden.

More tube chopping and changing and maybe time for just one more cache. 😉

A cache a mere stones throw away from the stunning Hospital club where the event was to be held.

A popular London cache, located in Neal’s Yard. A great place I doubt I would ever have stumbled upon without seeking a cache.

A popular place though and enough muggles to bring you out in a cold sweat.

Only one thing for it. Sit on the nearby bench and build up my nerve.

I Share my nerves with Twitter who aren’t the most sympathetic bunch 😉 and then amusingly clock someone approaching, phone aloft in an all too familiar manner.

Joined on the bench  for a Mexican standoff, I suspect he may be turning to Twitter to complain about a pesky muggle sat on the bench. 😉

I’m happy to admit I’m not the most sociable creature until my coffee levels are adequately topped up, so I decide to leave the cacher in peace and duck into the coffeeshop across the courtyard.

With the coast now clear and with the buzz of caffeine it was time to get on and get the job done.

The cache located, signed and returned and all without getting arrested feels like one hell of an achievement.

On the wall nearby a magnetic board and words to express your creative desires, for me a fitting tribute for the moment….

For now my playtime for the day over.

Off for an afternoon of PR and Pimms darling, but a fabulous opportunity to change my experience of London caching and leave me with the hope of returning sometime soon to do some more.

4 thoughts on “Geocaching in London”