Coming to the end of our Somerset trip I was thrilled to wake up to some magical words.

Mr muddy declaring to the children that it would be a day for me to do what I wanted, and he guessed that would be geocaching.

I needed a plan before he changed his mind.

After our recent caching high I was keen to continue in the search of geocaching greatness.

Handily thanks to a recent Twitter conversation I had a list of recommended local caches. (Thanks Barbara.)

Top of the list was Glastonbury Tor and so it was here we decided to start our day.

A steep climb is certainly a novel way to begin your day, especially when you hail from the fens.

The view from the top however offering outstanding views of the surrounding countryside. 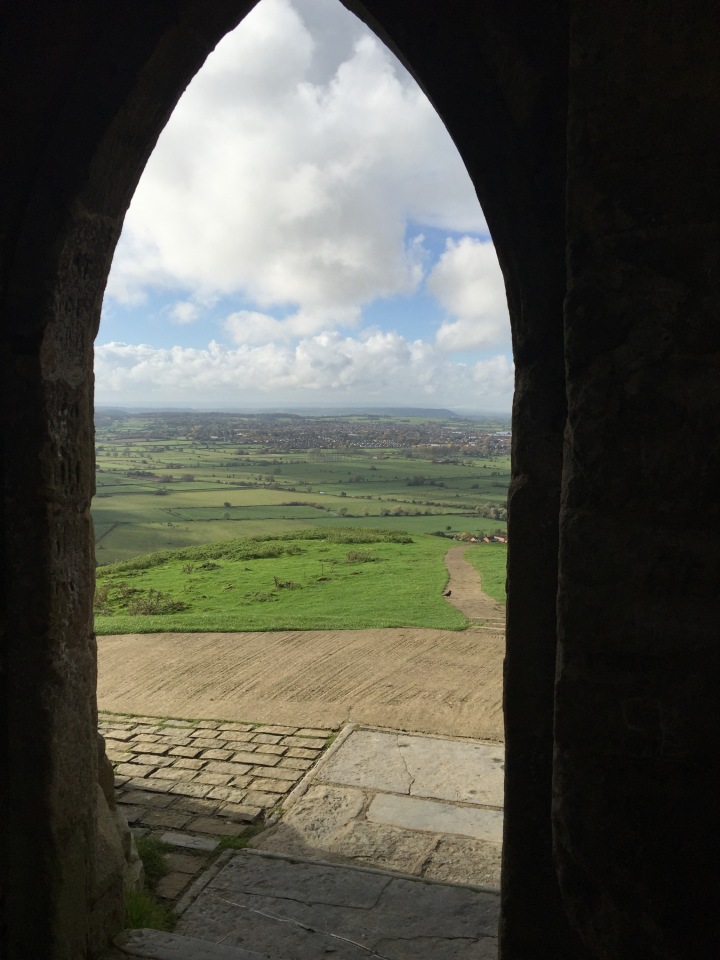 We initially bypassed the cache, focusing on the summit.

After a brief explore though the cache was calling to be found. (It really was. I heard it!😉)

We took a quieter path back down and soon had a track eyed up for the final descent to the cache. Given my recent form I kindly volunteered Mr Muddy to go down first, so that I could relay the children down to him.

To my utter delight he slid down backwards in comedy fashion.

Even better, I then spotted a far less slippery path which led me straight to the cache, with grace and style. If looks could kill….

Then a lunch stop in Glastonbury, Tie-dye capital of the world, and it was back to the geocaching drawing board.

Looking for something exciting, something different to the norm.

Referring back to Barbara’s recommendations once more I spotted something I’d missed previously. More magical words. This time the phrase; ‘around the old Railway Tunnels.’

Luckily as well as hippies and incense,  Glastonbury is also full of 3G so I set about finding the cache details. Fortunately knowing a rough location I fairly quickly struck gold.

Tunnel Vision was to be our next stop.

Parking nearby, I did what any self respecting geocaching obsessive would do and checked for other nearby caches. As luck would have it one was just across the road.

Part of a local trail, a quick find, a specimen pot hidden under a stone.

It felt sordid and cheap after the fantastic caches we had found so far.

Feeling rather disillusioned we crossed back over the road and followed the muddy track which we hoped would lead us to geocaching greatness.

Suddenly the track widens, and there at the end of it we spot the darkness of a tunnel.

Things are looking up.

The GPS quickly indicates we are heading the wrong way.

Apparently there are two tunnels and we are heading to the smaller one. Which doesn’t have a cache.

Who cares? Let’s go and explore it.

The tunnels thick with the air of long forgotten buildings. The eerie feeling of an abandoned place filled with history and adding to the creepiness, hanging vines and flora as nature tries to reclaim the hillside once more.

Luckily I am for once a woman prepared. The backpack still filled with torches, kitted up we are ready to explore.

The boy instantly unleashing his inner zombie (told you it was creepy), scaring the bejesus out of my youngest who emits perfect horror movie screams it would seem. You learn something everyday…

The tunnel a fascinating mix of man made sections and the natural rock of the hill it is carved through. A fascinating place to explore. We emerge at the far end declaring the place seriously cool.

Now we need to retrace our steps to find the other tunnel. The big one. Yes!

Luckily the tunnels are named according to their bearings so the correct path proves a doddle to find with a compass.

Then, there it is. The big brother.

The patch of daylight at the far end much smaller this time…unleash the zombie!

Ditching the GPS. (they don’t work indoors.) We are looking for certain markings on the wall to let us know the cache is nearby.

The zombies children scamper off in search of hidden treasure and make a quick find in the tunnel walls. For once I’m not too fussed about the cache. Much preferring  to take in my surroundings.

Another fantastic caching experience and clearly I’m not alone in my enjoyment. I’m instructed that the team want to go and find more…..Clearly dark magic is at work in those tunnels…😉

Mr Muddy suggests the rest of the local trail. The trail to which the pee pot belongs.

Back to the drawing Board yet again.

Then a reminder from Mr Muddy about a sulk I’d had the other day. As we’d driven past an impressive gorge and had  huffily pointed out there were geocaches there. Geocaches I wasn’t able to stop and find.

A quick read about the Ebbor Gorge caches and it sounds like they fit the bill. The CO however tells a tale of treacherous paths and great caution.

It doesn’t really sound family friendly… I guess there’s only one way to find out….

A swift descent and sudden thick tree cover a sharp reminder of the recent clock change and time is getting on. We’ve got torches though right?

Wrong, they are in the car back up the top of the gorge. It’s still hopefully just early enough though so we press on.

Mr Muddy assures me he still has a torch. (although I suspect he secretly hopes we do have to venture back in the dark) Nutter.

The path whilst challenging turns out to be perfectly safe. It is also stunning.

We are soon heading back up the other side of the gorge.

The kind of path that makes Mr Muddy and I giddy with glee. (He’s as odd as I am)

The kind of path that is a mere crack through the rocks, and in times of rainfall has aspirations of Niagara.

We push on. Finding the caches and having a marvellous time.

Reaching the top we approach a small track for what is to be our final find of the day.

A cache pretty much just hastily shoved in a bush. Seemingly not very special.

Until you round the corner for a knockout view.

A view well worthy of a favourite point.

We’ve reached the viewpoint. By viewpoint however they mean ‘clear patch on a lethal cliff edge’, the type of viewpoint that has me squeaking at the children to watch their step. 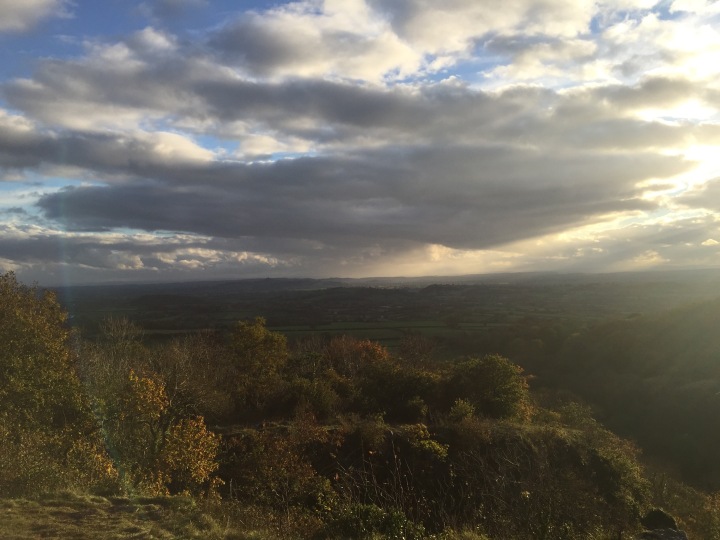 We are rewarded for our late adventure by stunning views bathed in the light of the sun starting to set. The type of vista that makes you glad be alive.

Looking across the landscape we spot Glastonbury Tor off in the distance. A fitting end to a day that has been so packed full of discovery.

Before the light finally fades we make our way back to the car, with the happy glow of tiredness and fun.

Sadly there was one more cache on the way back that we couldn’t find.

It’s never nice to finish on a DNF, this time however it doesn’t seem so bad. I guess you can’t have it all.

16 thoughts on “Tors and Tunnels.”