I love the idea of wild camping. Sneaking around in the wild, finding the right spot to set up camp.

A night spent under the stars with your sleeping mat, sleeping and bivvy bag. Leaving at sun rise without a trace that you were ever there. Factor in that unless you have permission you aren’t meant to be there and it becomes really exciting!

However I’m a mum of three young children. Skulking around the woods at night,  permission or otherwise….I need to be realistic. Oh yeah, and I’m a wimp!

That’s why we love the wild camping site so much at Wicken Fen. For £35 we hire the whole site for ourselves. Miles away from civilisation, deep in the wilds of Wicken fen, we explore, we light a campfire, we get thoroughly grubby. Oh and there is a toilet, a compost one but it’s a toilet. The children still get to have a thoroughly wild time.

Last time despite it being the beginning of May we froze overnight. This time armed with hardcore sleeping bags and it being August we were sure to be a bit warmer.

Just a shame there was a weather warning for heavy rain forecast. Oh deep joy!

Under ominous skies we set off late afternoon and were soon setting up camp.

Well by we, I mean everybody else. Somebody has to give direction right? 😉

With a no gadget or toy rule the children have to look to nature to provide their entertainment, making up games, wheelbarrow rides (who doesn’t love those?) and climbing trees. They can explore the fire with an adult present and were soon finding out that green sticks don’t burn, and welly boots might just melt! 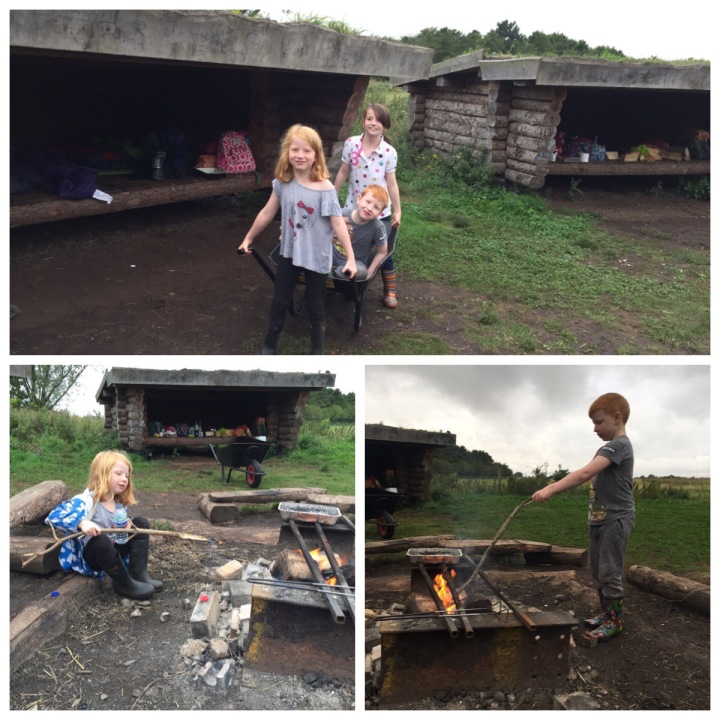 Risk and challenge folks. Let’s stop wrapping those children up in cotton wool.

A campfire dinner then an explore of the fen. We attempted for the second time the nearby geocache but still no luck.

Despite the sky threatening otherwise we avoided a drenching and arrived back at camp at dusk, just in time for a spot of bat detecting.

No success for a start but as darkness descended the bat dectectors starting to come alive with the sounds of invisible visitors above our heads.

Curious what it sounds like? There’s a video on Instagram. In true BOGOF fashion it’s also a great clip of the kids bickering.

Two children. Two bat detectors. Seriously! Arguing over who had the sound coming out of their detector. Give me strength! 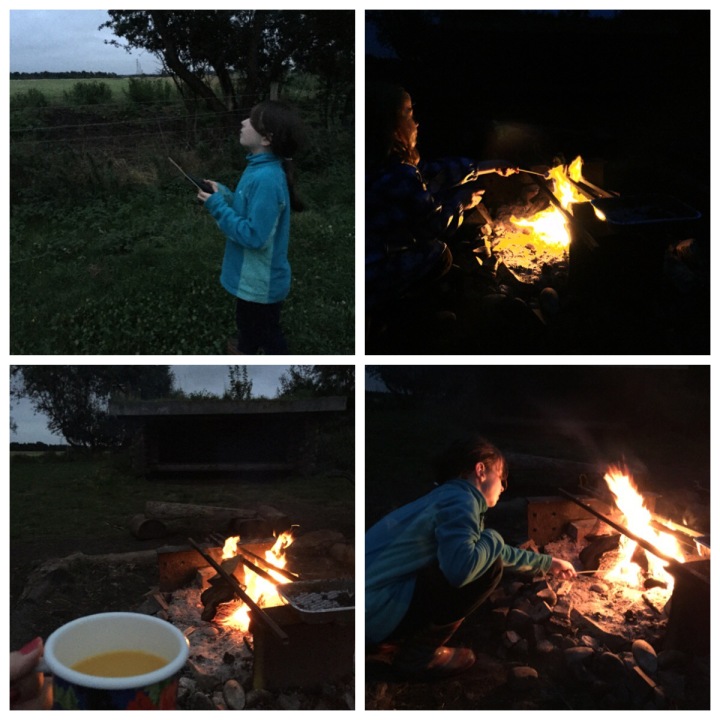 And then of course campfire law dictates that you simply can’t have a campfire without toasting marshmallows.

For once I’m all for following the rules. Only I don’t much like marshmallows so I have a campfire vodka instead.

Now in the the complete and utter darkness, that you can only get when truly out in the middle of nowhere, I remember how scary this is.

Unable to see beyond the fire, yet able to hear a whole lot going on with our nocturnal friends out on the fens.

The kids all worn out from the abundance of fresh air and exploring, we head to bed. Settling down in our sleeping bags for the night we find we are a bit too warm.

You should see the cobwebs on those huts. *shudder* Just don’t think about the spiders.

Things aren’t helped when the boy suddenly calls out. ‘Woah! BIG spider above your head.’

He said woah. It must be big.

I start to inch out of the hut like some great big fat caterpillar.

Not helped by my husband saying; ‘Good God. Just don’t look up.’

With the spider squished evicted it’s time to settle down again. The rest of the family all crash out straight away whilst I think happy thoughts and stare at the roof of the hut. No spiders. No spiders…..

2am I’m still awake and Mr Muddy wakes. He builds the fire up once again.

Just because he’s a man and you know, the fire thing. Instinct. No fighting it.

I decide it’s a good a time as any to brave the dash to the compost loo. I’ve done the festival thing a few times I’m no stranger to a compost loo, but let’s just say it’s a more pleasant experience in the depths of winter the cooler climate if May. Still hold your breath and make it quick, it’s still far superior to peeing in a hedge.

Emerging once again in the dark and Mr muddy is no longer by the fire. Eek! Being the wimp I am I peg it back to the hut and leap into its warm spidery embrace.

I didn’t get away with such wimpy behaviour. Damn!

Eventually however sleep did take over.

Sadly a few minutes later the sun rose and woke us all up. 😴

You can’t however beat that rather special moment as the sun rises across the fens and you wake up in the middle of it.

Well, you can actually. Stick a cup of coffee in my hand and you’ve got it spot on!