So after my *ahem* less than successful tree climb not only was Mr muddy slightly mortified by my little adventure, he was also green with envy.

The next day he was starting to feel a bit more human so decided that the best way to treat chicken pox spots is to go scratch them about a bit climbing some trees.

We drove alongside  my eventful little tree which I duly pointed out.

He laughed so hard he snorted.

I’ve likened Mr muddy previously to a monkey. He’s a bit of a climber.

I once lost him on a trip to the Botanical Gardens in Cambridge. Eventually I spotted him high up in the giant redwood.

Needless to say he was soon scrambling up trees and hunting down caches. 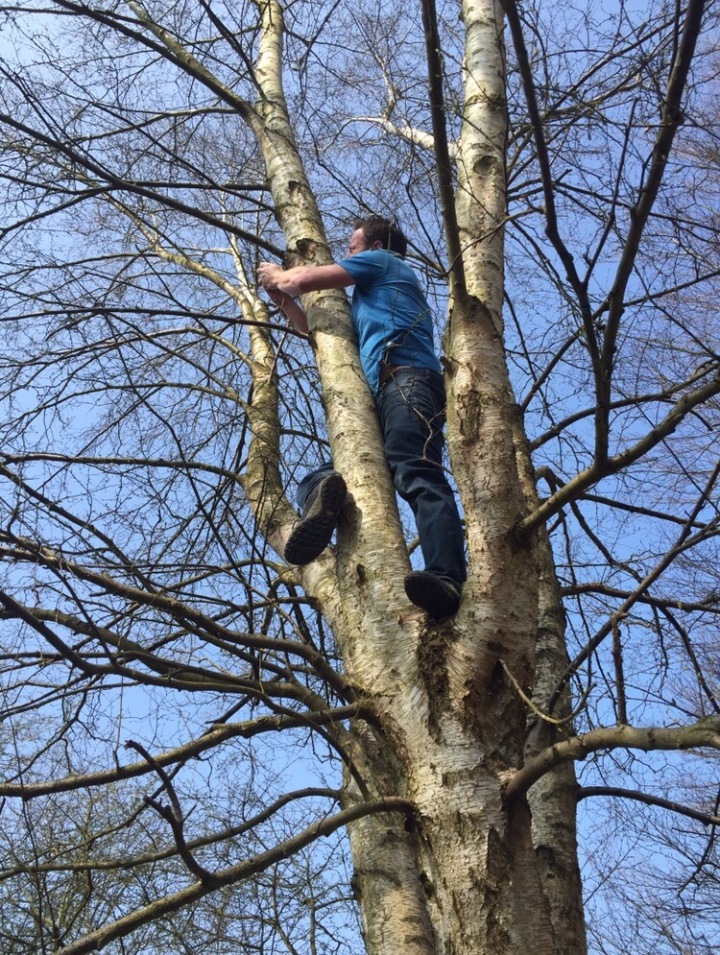 On his first tree he called out: ‘Are we first to find?’

I didn’t think we were and replied as such.

Mr Muddy’s first FTF. I suspect he no longer thinks I’m such a dipstick over my previous FTFs now….

We continued the trail, finding some, first to finding others and absolutely, completely DNFing the rest.

The huge Oak I mentioned last time, on closer inspection had an ammo can too. Turns it’s one twisted piece of work with a multi part field puzzle at the top.

We can’t get into the tree , We have a ladder that’s up to the job but the puzzle may thwart such a method. Damn!

What do you do in such a situation?

Sulk and make a rope swing instead!

I love the idea of lots of other mini cachers playing on our swing whilst their parents drive themselves crazy trying to get into that tree. The FTF has now gone. The beast of Oak has been tamed.

I’d love to conquer this one some day, I just need a plan. Or a cherry picker.

Another of our first to finds for the day was another whopper of a tree. Tricky to initially get in but not too bad to climb. The cache right at the top, positioned behind a right sod of a branch to negotiate. Mr muddy fought a gallant battle and emerged victorious.

On his return to Terra firma he triumphantly declared; ‘Finally you see why you married me!’

Got it in one darling! 😉

Our visit sadly ended on a string of DNFs.

We were getting fed up with struggling to pinpoint trees. Battling with tree coverage and scaling likely trees wasn’t proving successful.

We were tired of peering up into branches against the glare of the sun. It was turning into a case of not seeing the wood (or the caches) for the trees.

Now where did I put my cherry picker?…..